Who Moved my Cheese? er, Bass? 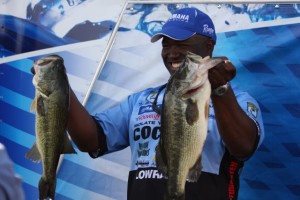 Pro Anglers Like Ish Monroe Try To Stay Current, even on their Home Waters – photo by Dan O’Sullivan

During my time in Corporate America, I, and the rest of my coworkers were forced to read a book entitled, “Who Moved the Cheese?”  It is a story about a pair of mice and a pair of littlepeoples who find a supply of cheese, and they build their homesteads around that supply in the maze.

As the supply dwindled from consumption, the mice began to seek more supply, while the littlepeoples suddenly find the supply gone, and they wonder Who Moved My Cheese?  While that a brief and ineffective summary of the book; the same scenario often happens with bass anglers.

I hear it all the time around tournaments.  This lake is in a downturn, I bet the meat fishermen have fileted all the bass.  There are often following closely by, the bite just sucks.

Maybe the bite doesn’t, maybe we do.

I’m often struck by how anglers are creatures of habit.  We choose the same lures, we fish the same spots, and heck, we even load our boats and tackleboxes based on the calendar month.  I also can’t tell you how many times I’ve heard the statement, “ooh, it’s February, time to get out the jerkbaits, or it’s June, now the frog bite will start up.

The problem with that type of statement is that it’s putting yourself in a container that you have to claw your way out of, in order to get a bite.  I’m convinced that anglers paint themselves into a corner more than they have a hard time locating and catching bass.  Here are a couple of examples of what I’m talking about.

California Delta
For many years, the California Delta has been a pig farm.  The average winning weights for spring tournaments has routinely been well into the 30’s, and sometimes cracking 40 pounds.  Not only was the winning weight high, but it often took weighing a mid to high 20’s limit to earn a check. 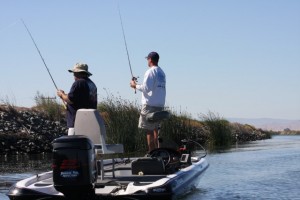 Thinking back to the 2010 Western Swing of the Bassmaster Elite Series, and Skeet Reese came off the water after the first day and weighed a 15-pound limit.  He was quite upset, feeling like he had blown the tournament, until I told him that he was in the top 15; at that point, he was perplexed.  His response was “when was the last time 15 pounds was worth anything in the Delta?”

The Delta in the prespawn through postspawn had largely been dominated by swimbaits and wakebaits as well as Flippin’, and as long as the fish remained in the areas or type of cover they had been in, the anglers in the know could take advantage of the situation.

For a couple of years, the weights began to slip, and anglers started talking about how the fishery must be taking a hit from a variety of factors including pressure, droughts etc.  That all changed when the Punchin’ bite became popular and we learned that the truly big fish had moved into the heaviest cover to feel comfortable.  Once the anglers adjusted, the weights started climbing again.

Guntersville
We’ve long heard how Guntersville has been one of the top bass fisheries in the world, and the statements has been accurate.  Like so many other big fish fisheries, Guntersville routinely produced 30-pound stringers and the need to eclipse 20-pounds to even sniff a check. Of late, the weights have been a little lower.

The discussion before the event was that the lake was in a downturn, the bite is not good, there are fewer little fish being caught and the bigger fish are harder to find.

I’m not sure that it’s not just the fact that the anglers haven’t moved to find new cheese. 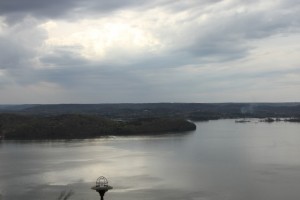 Has a Dark Cloud Moved in over Lake Guntersville, or has the Cheese Moved? – photo by Dan O’Sullivan

My Theory
I’m not going to sit here and tell you that I’m a stud tournament angler who just never broke through.  In reality, but I chose what I do for a living, and while I love to fish tournaments, I’m a better writer.  However, as a writer in this business, I tend to pay attention to trends and I tend to listen to what the anglers are saying about a fishery from year to year.

I am convinced that the fisheries don’t always decline, but rather, the anglers who fish them frequently tend to get close minded and whether they fancy themselves as fishing for patterns or not, are more apt to fish old stuff because they caught one there in the past.

The only anglers who truly dominate on a body of water truly do understand a body of water and the factors that influence fish movement and they are able to locate the fish more frequently, as opposed to “having some really good secret spots” on the lake.

I believe that the Delta was a situation where the fish moved due to pressure, and it took a while for anglers to find them again.  As far as Guntersville goes, the fact that the TVA is on a crusade to remove the grass from the lake is a likely culprit.  The areas that concentrated bass in the grass are few and farther between, and anglers are not finding the easy pickings any more.

Go Find New Cheese
We hear it all the time from the pros, you have to fish the conditions, you can’t get stuck in history.  Those who constantly win on the tour level are anglers who are able to put history out of their minds and go locate the most current pattern on the lake.

Instead of doing Internet research to find the spots and lures that have won tournaments in the past, experiment.  Look at fishing reports to try and learn the current conditions; things such as water level, weather trends and water temperature and clarity.  Then, go out with the intent of learning as opposed to showing off how many fish you can catch, and perhaps then we can begin to better predict where our cheese will move to in the future, as opposed to starving while we try to find it again.

In other words, try something different, something new, it may help you as an angler in the short term, and the long run.