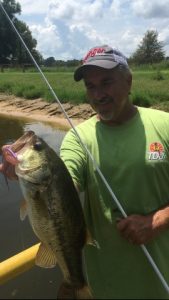 These are times of the year when an angler can go just about anywhere on the lake and catch bass, and often some of those are real bragging board material.  While those times of the year can be lights out action, the period leading up to them can be some of the more difficult to figure out.

In much of the country, we’re in the middle of one of those periods right now.   It’s November, and by now most of the anglers in the country would have been running around their lake slinging topwaters, jerkbaits and Rat-L-Traps having a heyday.

However, there has been a problem this year; the fall bite has been delayed.  Much of the reason is that large portions of the country have received very little rain and the air temperatures have been unseasonably warm.  What this has led to is an extended period of that tough, fall transition period where bass aren’t where they used to be, and not where they are going to be for their usual fall feed.

Madison, Miss. Pro Pete Ponds has developed a system for finding fish in these conditions and then he works to make them bite.  “The most important part of this time of the year is finding groups of fish,” said Ponds.  “I do that by spending a lot of time looking at the mapping on my Lowrance HDS12 to locate likely areas, and then using the Down Scan features to locate groups of fish on those areas before even choosing a lure.” 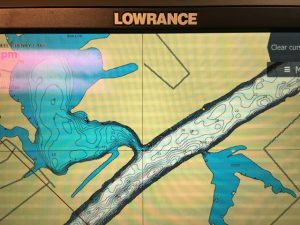 What to Look For
Ponds feels that areas that provide immediate access to the shallows from the main lake or river are best.  He said that they must have some depth, and they should not have direct current flow pushing straight into their openings.  “I want the area to be at a 90-degree angle to the current, and have some depth in the middle of it,” he said.  “If the current blows directly into the mouth, the fish won’t be congregated in the opening; they will be scattered in the backs or still out on the main lake areas.”

He said that he spends hours poring over the Insight Genesis and Navionics maps on his touch screen.  He starts with the map screen zoomed out looking for the right angle of entry, then he zooms in to see that it has the right depth ranges, and he marks it.  “I can spend an hour on my Lowrance sitting in the boat next to my camper at night and find more places than I can cover in a day,” he said.  “Once I see the kind of area on the screen I want to explore, I can make a waypoint to check the next day when I’m on the water.”

He said he does his search by using his finger to swipe the touchscreen of his HDS12 similarly to using a smartphone, and once he sees the type of area he wants to scout, he touches the screen at the precise spot, which freezes the screen and make a cursor there; he then uses the waypoint button on the side of the screen to mark the spot. 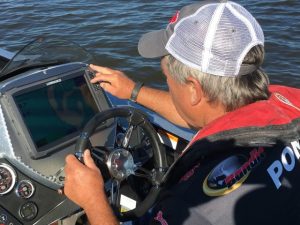 Scanning the Likely Spots
The next morning, once he is on the water, Ponds said that he drives his boat to as many of those waypoints as he can quickly.  Once there, he changes to view of his screen to one that shows Structure Scan and Down Scan together.  It is this point that he is looking for the right depth range and to see if he can locate fish in the mouth of the cut.

He said both components are critical to the spot being successful.  “I want there to be depth of at least 10 feet, to 25 feet or more, and I have to see fish holding on the points of the opening,” he said.  “I use Structure Scan to see out both sides of the opening, and once I see something that looks like fish,” I’ll idle over it with Down Scan to get a better view of the structure that they are holding on.  Structure Scan helps me see a broad view, while Dow Scan gives me a clear picture of how fish are holding on structure, and if there is brush or laydowns there, it really helps me distinguish the fish from the branches; it’s been a big help in locating fish.

What to Use
Ponds said that he carries only a few tools for making the fish strike once he locates them.  “After scouting with my Lowrance, I might have 10 to 20 spots that have all of the factors I want,” he said.  “I need to hit them quickly to be able to see if the fish will respond.” 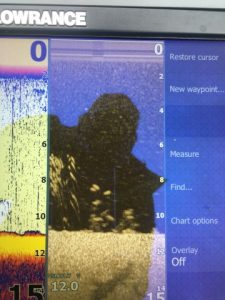 Depending on the depth, he will choose an appropriate Bandit crankbait, he will also have a Talon Football Jig tipped with a YUM Christie Craw, and he will also have a dropshot rig tied up.  He will choose them based on the conditions.  “If there is current and the fish are on the upstream side, it means they are aggressive; that’s when I’ll choose the Bandit crankbait,” he said.  “I’ll have the Talon jig on as a backup / switch up jig for those fish – to show them something different.”

However, he said that due to the conditions, and the tougher nature of the time period, his most effective tool is the dropshot rig. “This is typically a tough time of the year,” he said.  “I tend to have to fish them vertically with the YUM Sharpsooter on a dropshot rig.”

For his vertical presentation, he chooses a 7’ medium-light Duckett Fishing spinning rod paired with an Ardent spinning reel spooled with 15-pound-test Vicious Fishing Braid and a 6-pound-test leaser of Vicious Elite Flurocarbon.  He nose hooks a 6-inch YUM Sharpshooter worm, and uses as light a dropshot sinker as he can; usually between 1/8 to 1/4-ounce in size to present the lure vertically to the fish.”

This is where the Down Scan feature of his HDS 12 truly comes into play.  “The Down Scan feature really helps me separate the fish from the bottom,” he said.  “It also helps me follow my dropshot rig as it falls, which helps me make sure that I am putting the lure right on the fish’s nose; which is something that helps get bites in these tough conditions.” 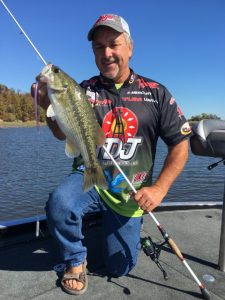 Wrapping Up
Ponds said that these tips have helped him put a few more fish in the boat.  “This can be a really difficult time of year to fish,” he said.  “Most anglers cope by running around the lake fishing as many rods as they can on as many spots as possible to try and put five quality fish in the boat.

“By doing a bit of preparation on my Lowrance HDS12’s mapping and then using the Structure Scan and Down Scan features, I give myself the ability to locate schools of fish that often get overlooked,” he said.  “Those schools can often be the ones that allow me to slow down and focus.  I don’t often fish well if I get in a hurry, and this process helps me stay in my comfort zone; which helps me catch more fish.”