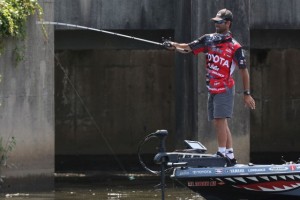 He comes from the Northeast, and he’s written a book about finesse fishing with Bassmaster Senior Writer Steve Price, but don’t let that fool you, Mike Iaconelli is not just a light line angler.

In fact, Iaconelli lists himself as a “power fisherman” who loves to move quickly and find aggressive fish, or cause inactive fish to strike out of reaction. His understanding of finesse fishing has helped him figure out ways to implement components of his power fishing styles into times when other anglers are forced to go into finesse mode.

“A long time ago, I started trying to figure out how to try to appeal to a larger fish when things got tough to try to help me be more competitive,” said Iaconelli. “I started playing with different styles of compact jig styles because it allowed me to present a power technique in a more finesse minded way.”

The problem was, he couldn’t find a jig that he would deem to be the “ultimate” version. “I had some that had good hooks, but the head was wrong, or some that had a good head, but too light a hook,” he said. “I started talking about it with my friend John Crews, and we came up with a new jig that was exactly what I wanted.” 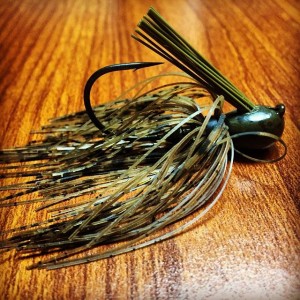 The result was the Missile Jigs Ike’s Mini Flip Jig, a lure that matched his specs, and allowed him to fish it exactly how he wanted.

This new jig is built around the way that Iaconelli likes to fish it. He wants to be able to make precise presentations, and have the lure be able to draw the reaction strike, and be able to come out clean for the next flip.

It features a custom shaped head that places the weight forward so that it falls straight down on entry, and a recessed line tie for reduced gathering of weeds. It has a fine cut skirt for more action with less movement of the rod or current, a precisely angled weedguard and it is all built around a custom hook that is strong, compact and sharp. It is available in six colors that are made to mimic a custom, hand tied jig; including custom painted heads.

He shortens them all to keep the offering compact. “I trim as much as half of the longer trailers off, and as little as an inch in the case of the chunk style,” said Iaconelli. “I want the overall appearance to be something that a bass could easily get a hold of without issue.”

Power Finesse Gear
Like any other application, and angler must use tackle that gives him the ability to present the lure and handle fish that strike. In this instance, Iaconelli prefers to use an average length rod, as opposed to a Flippin Stick. However, he still wants the rod to have the power to pull fish from cover. His choice is a 7’2″ medium-heavy Abu Garcia Ike Series rod he described as an 80/20 action. “This rod is perfect for the presentation because it has a taper that includes 20-percent tip and 80-percent backbone for power,” he said. “If the rod has too much tip you can lose control of the fish. Too much ass and you rip big holes during hooksets; and the result is lost fish.” 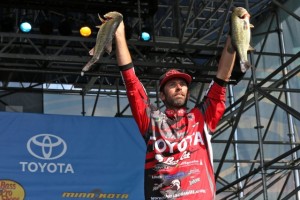 When to Use Ike’s Mini Flip Jig
He turns to this package when one of three things occur. The first is when bass get in a negative mood. “This can happen with abrupt weather changes or heavy fishing pressure,” he said. “I scale down and get a few more bites than I would with a regular jig.”

Another time is when the prevailing size of the bait is smaller. There are some bodies of water across the country where a three-inch crawdad gets eaten where a four-inch or larger one will not; that is one time when Iaconelli opts for a compact offering.

The third time is unique to the construction of this jig, and that is when he needs a fast fall for a reaction strike. “The head shape and thin skirting make this jig fall quicker than other jigs in their same weight class,” he said. “When bass are inactive, and buried in cover, I can trigger reaction strikes with this jig.” 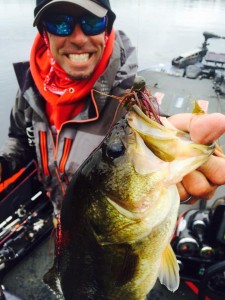 Power Finesse Retrieves
Iaconelli said he uses one of three presentations to draw strikes. The first is a standard Flippin’ and Pitchin’ presentation. “With this, I present the lure into the cover and let it fall straight down,” he said. “Once it hits bottom, I pick up the slack, and work it through the cover with slight shakes and hops.” Once he gets through the target, he repeats to the next piece of cover. This is the retrieve he used to win the Bassmaster Elite Series event on the Delaware River last season.

In colder water; as he has been doing this fall and winter, Iaconelli has been dragging the jig more, letting the lure stay in contact on the bottom. This presentation is often key to triggering strikes from bass that are hunkered tight to the bottom in cold water.

Finally, he found that he could effectively swim the jig through sparse milfoil or hydrilla while the Elite Series was sitting through three days of weather cancellations in Bays deNoc in Escanaba, Mich. “My Uncle Don and I got stir crazy sitting in the hotel, so we found an unconnected, land locked lake, and went fishing,” he said. “I caught a bunch of fish swimming it around the edges of the grass.”

The Wrap
The eight-time B.A.S.S. tournament winner said the lure has given him increased confidence, and allowed him to continue fishing his power techniques further into a time when he would have to scale down. “In my job, the name of the game is getting the biggest bites possible,” said Iaconelli. “Having something that allows me to present a slightly larger profile; that is not intimidating to a pressured bass, helps me get the kind of bites that I need.

“All of that can mean a chance to finish higher in the standings, and that is what every angler is looking for.”