Advanced Angler burst onto the scene in 2001 and our first Bassmaster Classic was 2011.  After that event, we launched our “Classic In Depth” series; which  goes into extreme detail of the practices, patterns, adjustment and turning points of the top five during the Bassmaster Classic.  So, with as much detail as we went into in these articles, we decided to reprint them in place of a new Classic Rewind; because you, the reader will get more out of it.

VanDam did more than simply win, he beat the field by more than 11 pounds, and in doing so; he set an all time heavy weight record for the Bassmaster Classic.  His dominance began with a plan that was hatched in the fall of 2010; one that was built on maximizing fishing time.

His plan required a vision into the future, and for it to be successful it needed a set of circumstances to line up.  His choice of fishing area was made based on something that might happen in the future, and when he all but committed to the location, he wasn’t even sure the kind of fish that inhabited the area.

His plan required precision presentations and a calculated patience that kept him locked into focus on one area and a specific set of targets that produced his winning stringers.  In a way, the win 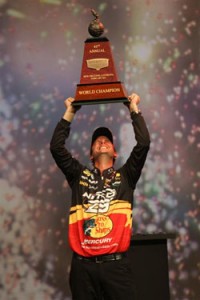 was vintage KVD, yet a frightening continuance of a new, more patient competitor that has seemingly reached a new stride.

Practice
VanDam chose not to visit the Louisiana Delta during the period before the water way went off limits to the competitors.  While other competitors spent days and weeks fishing the waterways, or searching for the most efficient runs to far away fishing grounds; VanDam was attending to family and business needs.

However, the decision not to go south did not mean that VanDam was not strategizing.  “I chose not to go to the water because I had made the decision to make the long run to Venice,” said VanDam.  “Knowing that the water in the Mississippi River runs cold this time of the year, I knew fog was a strong possibility; so I ruled Venice out.”

He laid his cards on the table of efficiency, betting that he would have more fishing time, even during a fog delay.  He concluded that his best chance to win was the Bayou Black area; where he won his first Classic title in 2011, Lake Buff and finally the Lake Salvador / Lake Cataouatche area.

He revealed that he spent one day in the Bayou Black area, but he didn’t find the area to his liking on Friday’s first practice day.  He spent the second round of practice in the Lake Salvador / Lake Cataouatche area, and found it to his liking.  “Cataouatche had good grass and a bunch of stumps mixed with a hard bottom,” he said.  “I fished there for awhile, but didn’t get any bites because the water was cold still.” 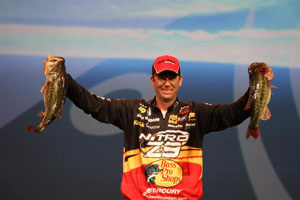 Seeing the surroundings and banking on a forecasted warming trend, VanDam said he was almost entirely committed to Cataouatche, without even getting a single bite.  “I like what I saw, and the water got warmer as the afternoon progressed,” he said.  “I was pretty sure I was going to fish there for the tournament, even though I didn’t get any bites that day.”

He said that he spent the final full practice day looking for backup patterns in the area; then he did the same for the official practice day.  “I was really sick on Wednesday’s practice day with some kind of stomach flu,” said VanDam.  “So, I looked around the area and decided to check it in the afternoon when the water had warmed, and when most everyone else had left.”

Tournament Day One
It didn’t take too long for him to capitalize on his area.  “I caught a four pounder on my 10th cast with a spinnerbait,” said VanDam.  “Then I caught another four pounder, as did Aaron (Martens) who was fishing right next to me, then with the pressure of our fishing, the spectators and the locals, it kind of slowed down.”

He said that even with the fast start of the first morning, his day turned out to be slower than he’d hoped.  “A lot of people assume that you’ve caught a lot of fish when you weigh almost 20 pounds, but that wasn’t the case,” he said.  “The first fish I caught on the spinnerbait was solidly hooked, then all of the others were on the trailer hook; I even got 20 bites that just bumped the bait without taking it.”

That response from the fish let VanDam know that the spinnerbait bite wasn’t likely to last for three days.  “I knew I was probably going to have to change something,” he said.  “But, I still had good weight to start the tournament, and felt like I was in position.” 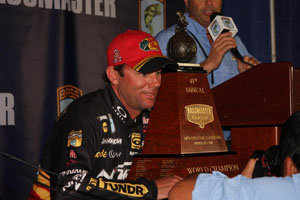 while the Kevin VanDam spinnerbaits are exclusive to Bass Pro Shops, their Tour Grade Spinnerbaits are essentially the same lure, with only the addition of painted blades, and are available at tackle stores everywhere.)

His first day weight of 19 pounds, 3 ounces found him in third place after the first day.

Tournament Day Two
The second day started quickly again, with VanDam catching three fish in the first hour, however, he was still experiencing a tremendous amount of short bites on the spinnerbait; he knew he needed to make a change. “As soon as the fog lifted, the spinnerbait bait got really bad,” said VanDam.  “I made the transition to the Chartreuse with Black back KVD 1.5 Square Bill crankbait and forced myself to slow down my retrieve.”

He said the advantage that the crankbait offered him was the ability to feel through the cover at a much slower speed.  “I had to reel the spinnerbait so slowly that I couldn’t feel the stumps,” he said.  “The crankbait allowed me to bump the stumps, and know what I was hitting; and still make twice as many casts with the crankbait.”

He felt his way through the stump field with his crankbait in the dirty water looking for the stumps so that he could make multiple presentations to each one.  It was when he made multiple casts to one particular stump that he clued into the part of the program that would prove to be the death knell to his competition.  “When I found stumps that were in a little deeper water with a mix of hydrilla and milfoil nearby; I had my best results.”

The action came quickly for VanDam, and he had his final weight by lunchtime.  His 22-pound, 8-ounce limit on day two propelled him into the lead with 41 pounds, 11 ounces for two days.

Tournament Day Three
The final day proved to be a KVD victory lap of its own.  He said that by 10:00AM he had 24 pounds in his livewell, and was able to start culling up a little at a time.  He was able to produce a final limit that weighed 28 pounds, and each of his keepers were cut from the same mold.  “I caught so many three to four pounders I lost count,” he said.  “My biggest fish was right at six pounds, and my smallest was around five pounds; it was just one of those days that comes around only so often.” 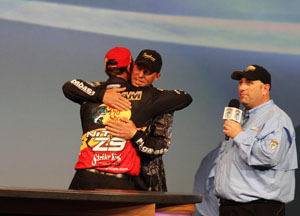 His final winning weight ended up being 69 pounds, 11 ounces; shattering the previous record; 56 pounds, 2 ounces, set by Luke Clausen at the 2006 Bassmaster Classic on Florida’s Kissimmee Chain of Lakes.

Keys
VanDam said that recognizing the conditions and the area were key to his program, but he also said it could have gone the other way as well.  “I saw the potential of that area and with the warming weather coming, I felt like it was the inning move,” he said.  “I believe that had it stayed cold I could have caught them on a Red Eye Shad, but it could have also kept those fish out of the area I was in altogether.  I took a huge gamble, betting on the conditions that we got, and everything just worked out.”

He said one key to his program was being able to efficiently cover the Tank Pond area of Lake Cataouatche, and his Humminbird 1198 with Side Imaging helped him to quickly and efficiently evaluate what was there.  “I was able to pick up subtle bottom changes and even where individual stumps were around the grass, and that helped me be a lot more efficient,” he said.   “Other than that, recognizing how weather and pressure would affect the Florida Strain bass, and being able to adapt my lures and retrieves to the conditions are what made the biggest difference for me during the week.”

For the crankbait, he chose the same reel and line, but went to his 7’ Tour KVD Cranking Series E-Glass rod.   He modified the KVD 1.5 Square Bill by replacing the stock hooks with Mustad KVD Elite Trebles.  The short shank, and wide gap construction allow him to upsize his hooks one size without tangling, and the heavier wire is built to withstand the low stretch power of fluorocarbon lines.

He also used a new fish activating unit called the HydroWave; a company he has become an investor in.  Hydro Wave is similar to the Biosonix units that were popular; however, VanDam, his tour colleague Jeff Kriet and his longtime friend Gene Eisenmann  acquired the rights to the technology.  “We had two working prototypes at the Classic, and they were a little aggressive for the first two days,” he said.  “But, on that third day, the loop that I used was a perfect match to the conditions, and it made a difference in how fish responded to my lure.” 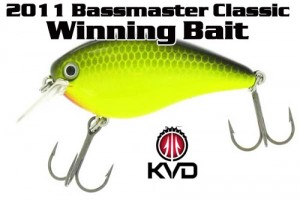 Get the Strike King KVD 1.5 at MonsterFishingTackle.com