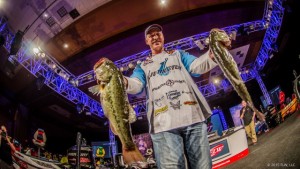 ROGERS, Ark. (April 25, 2015) – Livingston Lures pro Andy Morgan of Dayton, Tennessee, caught a five-bass limit weighing 10 pounds, 9 ounces Saturday to retain the lead on day three of the Walmart FLW Tour at Beaver Lake presented by Rayovac. Morgan’s three-day total of 15 bass weighing 39 pounds, 2 ounces gives him a 1-pound, 9-ounce lead as competitors enter the fourth and final day of competition in the event that featured 154 of the best bass-fishing anglers in the world competing for a top cash award of up to $125,000.

“Today was extraordinarily tough,” said Morgan, whose numerous career accolades include only one previous win on the FLW Tour, which came on Beaver Lake in 2007. “I caught my first fish around 9:30 a.m., then my second around noon. I caught my third keeper just five minutes later, and then in the last 30 minutes of the day I caught my last two. Just like yesterday I only caught five fish all day long and it was a grind.”

Morgan said that he is all out of the bed fish after catching them on the first two days of competition and that Saturday was all about junk fishing. Sunday will be more of the same.

“I’ve used a hodge podge of baits all week,” Morgan said. “I’ve caught them on a Zoom Finesse Worm, on a spinnerbait, on a Zoom Z-Craw and on a War Eagle jig. I caught a couple of fish this week on a buzzbait, too, but nothing that I weighed in. The key for me has just been to cover enough water and make enough casts that by the end of the day I’ve gotten five.

“Tomorrow, anybody in this top-10 can legitimately win this tournament. You’re going to have to have one big bite to win this thing – if somebody can catch a four- or five-pounder, that’s going to be golden.

“I like having the lead, because that means that someone can beat me by just a little bit tomorrow and I can still win,” Morgan went on to say. “It’s been a long time since I won one of these (FLW Tour events). I’ve had a lot of second place finishes, but I really, really want to get a W.”

The top 10 pros advancing to the final day of competition Sunday on Beaver Lake are:

Anglers will take off for the fourth and final day of competition from Prairie Creek Park Marina located at 9300 N. Park Road in Rogers at 6:30 a.m. Sunday. Sunday’s final weigh-in will be held at the John Q. Hammons Center, located at 3303 Pinnacle Hills Parkway in Rogers beginning at 4 p.m.

Fans will also be treated to the FLW Expo on Sunday from noon to 4 p.m. at the John Q. Hammons Center prior to the final weigh-ins. The Expo includes a Ranger boat simulator, the opportunity to interact with professional anglers, enjoy interactive games, activities and giveaways provided by sponsors, and learn more about the sport of fishing and other outdoor activities. All activities are free and open to the public. Also on Sunday, country music artists Backroad Anthem will perform a free live concert on the Walmart weigh-in stage at 3 p.m. Pros Rich Dalbey and Todd Hollowell’s “Hooked on Helping” foundation will also be hosting a food drive to benefit the Northwest Arkansas Food Bank. FLW fans who donate five or more cans of food will be entered to win a $50 Walmart gift card.