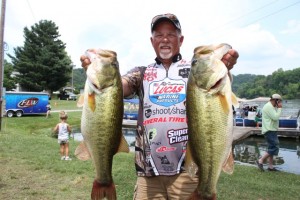 DAYTON, Tenn. (June 11, 2015) – Pro Billy McDonald of Greenwood, Indiana, brought a five-bass limit to the scale Thursday weighing 29 pounds, 12 ounces – the third-largest stringer ever weighed on Lake Chickamauga in FLW competition – to grab the lead on day one of the Walmart FLW Tour at Lake Chickamauga presented by Igloo Coolers. McDonald will start the second day of competition with a 3-pound, 10-ounce lead in the nationally televised tournament, hosted by the Rhea Economic and Tourism Council, that features 146 of the top bass-fishing anglers in the country competing for a top cash award of up to $125,000.

“Today was one of those days where every decision that I made was the right one,” said McDonald, who has 17 career top-10 finishes in FLW competition. “I caught fish all day long. I caught some fish shallow and some fish deep. I didn’t stay in one spot, I just kept moving.”

McDonald said that he started his day targeting grassy areas near deep water, then mixed it up and headed offshore for a bit before returning to the shallow grass. Of the five fish that he brought to the scale, three came deep and two came shallow. He declined to mention any bait specifics.

“I’ve got eight rods on the deck, and I’m catching fish on three of them,” McDonald said. “I’m still trying to mix things in.”

McDonald was confident that the fish would replenish in his key areas overnight and plans to approach day two exactly the same.

“These areas are reloading; there is not a doubt in my mind,” McDonald said. “I’m already out of contention to qualify for the Forrest Wood Cup, so I’m rolling the dice in this one and I’m going for the win. I hope I can go back out tomorrow and catch another good bag. If I don’t it won’t be due to lack of an effort, I can guarantee you that.”

The top 10 pros after day one on Lake Chickamauga are:

Wooley won the Bridgford Big Bass Award on the pro side Thursday with a bass weighing 8 pounds, 11 ounces, to win the $500 prize.

The top 10 co-anglers on Lake Chickamauga are:

Anglers will take off from the Dayton Boat Dock located at 175 Lakeshore Street in Dayton at 6:30 a.m. EDT each day of competition. Friday’s weigh-ins will be held at the Dayton Boat Dock beginning at 3 p.m. Saturday and Sunday’s final weigh-ins will be held at Walmart, located at 3034 Rhea County Highway, in Dayton beginning at 4 p.m.

Fans will also be treated to the FLW Expo on Saturday and Sunday from noon to 4 p.m. at Walmart in Dayton prior to the final weigh-ins. The Expo includes a Ranger boat simulator, the opportunity to interact with professional anglers, enjoy interactive games, activities and giveaways provided by sponsors, and learn more about the sport of fishing and other outdoor activities. All activities are free and open to the public. Pros Rich Dalbey and Todd Hollowell’s “Hooked on Helping” foundation will be hosting a food drive to benefit Recovery Dayton, sponsored by the Mountain View UM Church. FLW fans who donate five or more cans of food will be entered to win a $50 Walmart gift card.

Coverage of the Lake Chickamauga tournament will be broadcast in high-definition (HD) on NBC Sports Network (NBCSN) October 26 from 7 p.m.-8 p.m. EDT when Season 20 of “FLW” returns this fall. The Emmy-nominated “FLW” television show airs on NBCSN, the Pursuit Channel and the World Fishing Network and is broadcast to more than 564 million households worldwide, making it the most widely distributed weekly outdoors-sports television show in the world.