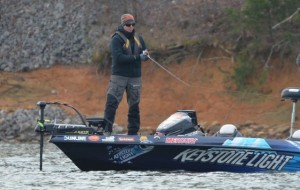 Brent Ehrler during Day One of Competition of the FLW Tour Event on Lewis Smith Lake outside Jasper, Ala. – photo courtesy FLW Outdoors

JASPER, Ala. (March 7, 2013) – A full field of the world’s best bass-fishing professionals began competition in the Walmart FLW Tour on Lewis Smith Lake presented by Evinrude on Thursday. After the final fish was weighed at the Lewis Smith Lake Dam Access, Keystone Light pro Brent Ehrler of Redlands, Calif., sat atop the leaderboard and now has his sights set on the top cash award of up to $125,000.

“My weight doesn’t really show the whole story of exactly what went on out there,” said Ehrler, the second-place finisher at the FLW Tour season opener at Lake Okeechobee. “It was pretty interesting how my day went. I mixed it up and did a bunch of different things. I was fortunate enough to get a couple of big bites.”

Ehrler brought a five-fish limit of spotted bass to the scales that weighed 17 pounds, 8 ounces. He holds a slim 8-ounce lead over Kellogg’s Frosted Flakes pro Dave Lefebre of Erie, Pa., who weighed in 17 pounds even.“I pulled up to a spot today that I didn’t get a bite on in practice, but it just looked right,” Ehrler said. “There were some good laydowns, and the bank just looked right. I saw some fish on my Humminbird, but I didn’t catch any. I fished quite a few areas and covered a lot of water. I was fishing near the area again later in the afternoon and decided to take another shot at it. That time, it worked.

“It just takes time, though,” Ehrler continued. “I had a long day today and didn’t have to weigh in until 5 p.m. Tomorrow, I weigh in at 3 p.m. That could change the outcome of how I will catch them. Having a long day let me fish relaxed, while having a short day tends to push you and make you fish a little faster.”

Ehrler did not want to divulge any information about his bait selection, but did mention that he wasn’t fishing too far from the takeoff site.

“I’m making a 20-minute run,” he said. “And I’m covering everything in between. I didn’t find a whole lot today, but I eliminated a lot. I think it could be a tough day tomorrow because this lake seems to really feel the pressure. Tomorrow I’m just going to worry about catching five. When I do that, then I’ll be going after a few big ones.”

The top 10 pros after day one on Lewis Smith Lake are:

McMillan won the 3M ScotchBlue Big Bass Award on the pro side with a fish weighing 6 pounds, 7 ounces worth $500.

For this event, FLW was issued a permit from the Alabama Department of Conservation and Natural Resources that exempted tournament competitors from the normal lake slot limit that states all bass measuring 13 to 15 inches must be immediately released.

Fans will be treated to the FLW Outdoors Expo at Walmart on Saturday and Sunday from noon to 4 p.m. prior to the final weigh-ins. The Expo includes Ranger boat simulators, the opportunity to interact with professional anglers, enjoy interactive games, activities and giveaways provided by sponsors, and fans can learn more about the sport of fishing and other outdoor activities. On Sunday, country music artist Dylan Scott will perform a free concert for fans on the FLW stage starting at 3 p.m. All activities are free and open to the public.