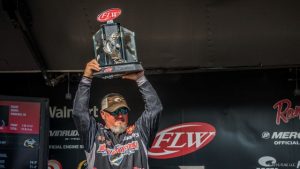 FLORENCE, Ala. (May 8, 2016) – Just six months ago pro Buddy Gross of Ringgold, Georgia, was an accomplished Costa FLW Series angler that daydreamed of competing against the best anglers in the world on the Walmart FLW Tour.

After a great season at the AAA-level, Gross qualified for priority entry into the 2016 FLW Tour. After the incredible week that Gross has had at the Walmart FLW Tour at Pickwick Lake presented by Quaker State, it’s safe to say that Gross has proven that he can compete with the best.

With a four-day total of 17 bass weighing 74 pounds, 5 ounces, Gross won by a 3-pound, 1-ounce margin, despite starting Sunday with a near 15-pound lead. Gross weighed just two bass totaling 4-14, but it was still enough to best 162 of the best bass-fishing anglers in the world and earn him $100,000.

“Today has been the biggest roller coaster of my life,” said Gross. “It was a long ride back to weigh in today – I really thought I was coming back for a second-place finish. Michael (Neal) is a true competitor and is the best fisherman that I know, and I knew that I had to catch at least 10 pounds to feel safe. Thank the Lord that I caught two, and it worked out like it did.”

Gross said that he caught the majority of his fish during the first three days of competition on a 200-yard bar running off of the bottom of an island. He found the fish keying in on eelgrass, and was catching them in 8 to 10 feet of water.

“I found the eelgrass on my Lowrance unit and I could see the fish setting up on it on my graph. I caught all of my fish there this week, except for the two today. There was no wind and no current today and that hurt, but I think I just ran out of fish. I had to scramble to catch the two that I did.”

Gross’ key bait throughout the week was a 1-ounce white Hog Farmer hair jig, but he also mentioned a Fringe Tackle Swimbait, a spinnerbait and a Tennessee River Tackle Tremor scrounger with a Zoom Magnum Fluke as baits that produced for him.

“The hair jig was by far the best bait for me in this event,” Gross said.

“Last year after I qualified through the Costa Series I really questioned whether I should take the risk, and if I could compete on the FLW Tour,” Gross went on to say. “It took every last dime that I had to come out here and compete this year, but my wife was behind me 100-percent and she said go. This win gives my family and I security and that is truly what means the most to me.”

Overall there were 41 bass weighing 124 pounds, 7 ounces caught by pros Sunday. Five of the final 10 pros weighed in five-bass limits.