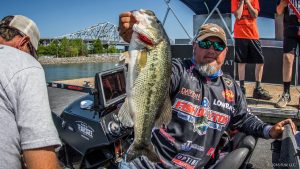 FLORENCE, Ala. (May 7, 2016) – Georgia pro Buddy Gross, brought a five-bass limit to the scale weighing 22 pounds, 12 ounces Saturday to extend his lead to more than 14 pounds after day three of the Walmart FLW Tour at Pickwick Lake presented by Quaker State. Gross’ three-day total of 69-7 make him the No. 1 seed on championship Sunday as the field is now cut to 10 in the four-day tournament that features 163 of the world’s best anglers competing for a top cash award of up to $125,000.

In second place is Gross’ travel partner on Tour, Michael Neal of Dayton, Tennessee, who weighed in five bass totaling 16-14 Saturday for a three-day cumulative weight of 15 bass worth 54-12.

“For years I’ve watched many of the anglers in this field catch fish on television, so to be heading into day four with the lead is a dream come true. The lord has truly blessed me at this event,” said Gross, who has one previous career victory in FLW competition – a 2010 Bass Fishing League (BFL) win on Lake Guntersville.

Gross said he started off his day at the same 200-yard stretch he’s been working all week – a mid-lake ridge littered with shells beds and grass clumps where shad are spawning. Similar to his first two days on the water, he said he was able to catch two bass fairly quickly Saturday.

“I got two in the boat with a hair jig before the FLW camera boats even found me,” said Gross. “Within 30 minutes I caught another two, including a 5- or 6-pounder. All of my big fish have been coming from sitting on the outside of the bar and throwing over it into the ditch.

“Around 10:30 a.m. I went offshore a little bit and threw a Tennessee River Tackle Tremor with a Zoom Magnum Fluke and caught three more. I was able to cull twice and was feeling pretty good.”

Gross said he stopped fishing within five minutes of his last catch on the Tremor and spent the remainder of his day looking for new structure to fish on the final day of competition.

“I roamed around and looked for new stuff, and I feel good about tomorrow,” Gross went on to say. “I think I’ll go to the ledges earlier, especially if I can get two good ones at the ridge. It’ll depend on the wind. It’s picked up the last few afternoons and kept me in, but if it dies down tomorrow I think I can finally finish on the ledges.”

The top 10 pros advancing to the final day of competition on Pickwick Lake are:

Pro Randy Haynes of Counce, Tennessee, who started the day in 9th place, had his day three weight disqualified for violation of FLW Tour rule No. 13 regarding methods of returning to check-in. After mechanical failure Haynes received a ride to check-in from an ineligible boat. FLW Tour rules state that anglers who have equipment failure can only receive a tow in, or a ride in from another tournament competitor. Haynes finished in 20th place with 10 bass weighing 31-9, good for $12,000.

Anglers will take off from McFarland Park located at 200 Jim Spain Drive in Florence at 6:30 a.m. on Sunday, the final day of competition. Sunday’s final weigh-in will be held at McFarland Park beginning at 4 p.m.

Fans will also be treated to the FLW Expo on Sunday from noon to 4 p.m. at McFarland Park prior to the final weigh-in. The Expo includes a 100-yard Lew’s Casting Lane, the opportunity to interact with professional anglers, enjoy interactive games, activities and giveaways provided by FLW sponsors, and learn more about the sport of fishing and other outdoor activities. All activities are free and open to the public.

The Walmart FLW Tour at Pickwick Lake is presented by Quaker State and is hosted by Florence/Lauderdale Tourism.