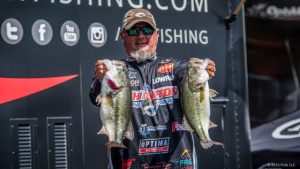 FLORENCE, Ala. (May 6, 2016) – Georgia pro Buddy Gross, brought a five-bass limit to the scale weighing 21 pounds, 3 ounces Friday to extend his lead after day two of the Walmart FLW Tour at Pickwick Lake presented by Quaker State. Gross now brings an 8-pound, 13-ounce lead into day three of the four-day tournament that features 163 of the world’s best anglers competing for a top cash award of up to $125,000.

In second place is Michael Neal of Dayton, Tennessee, who weighed in five bass totaling 14-14 Friday for a two-day cumulative total of 10 bass worth 37-14. The field is now trimmed to the top 20 on Saturday, with only the top 10 anglers fishing on the final day Sunday.

“I’m running a half-mile stretch at the end of a huge mid-lake flat where bass are heading out from the spawn towards the main river,” said Gross, who is fishing in just his fourth event as a professional on the FLW Tour. “Just about every bass I’ve caught in this event has been postspawn.”

Gross said his fish are congregating on shell beds and in isolated, clumpy grass.

“There’s a shad spawn going on in the morning and I think I’m catching the tail-end of it when I get to my area,” said Gross. “Yesterday, I caught four shortly after I arrived, but today I only was able to get two and had to grind out the other three. I lost a big one midday today which definitely would’ve helped me out. Hopefully there will be five more there tomorrow.

“I’m just worried about running out, that’s my problem right now,” continued Gross. “All seven of my bites today happened before 10:30 a.m. There isn’t much action after 11. I’ve wasted an afternoon for two days now, so tomorrow I’m going to have to go find something else to fish.”

Gross said he’s used one lure to catch the majority of his bass.

“One of my sponsors makes the bait I’m throwing and it’s doing well,” said Gross. “It’s a single-hook bait and I’m not losing many fish.”

The Georgia rookie said he plans on dissecting the same stretch on day three before hitting ledges in the afternoon.

“I’ll be out there looking for another school,” said Gross. “I’m going to head towards the river and just throw anything that will produce a good fish.”

The top 20 pros that made the Buck Knives Cut and will fish Saturday on Pickwick Lake are:

Monsoor earned the Big Bass Award on the pro side Friday, weighing a 9-pound, 13-ounce largemouth to win the $500 prize.

“I spent the week fishing shallow grass and ledges,” said Diffey, who was fishing in his first ever event as a co-angler on the FLW Tour. “I caught my biggest fish on day one with a Margarita Mutilator-colored Roboworm rigged on a drop-shot, and with a shaky-head jig with a split-tailed creature bait on day two. I rotated in Keitech Swimbaits as well.”

O’Rourke earned the Big Bass Award on the co-angler side Friday with a fish weighing 7 pounds, 4 ounces to win the $250 prize.

Anglers will take off from McFarland Park located at 200 Jim Spain Drive in Florence at 6:30 a.m. each day of competition. Saturday and Sunday’s final weigh-ins will be held at McFarland Park beginning at 4 p.m.

Fans will also be treated to the FLW Expo on Saturday and Sunday from noon to 4 p.m. at McFarland Park prior to the final weigh-ins. The Expo includes a 100-yard Lew’s Casting Lane, the opportunity to interact with professional anglers, enjoy interactive games, activities and giveaways provided by FLW sponsors, and learn more about the sport of fishing and other outdoor activities. All activities are free and open to the public.

Also for youth, the FLW Foundation’s Unified Fishing Derby will be held at McFarland Park on Saturday from 9:30-11:30 a.m. The event is hosted by FLW Foundation pro Cody Kelley along with other FLW Tour anglers, and is free and open to area youth 15 years of age and younger and Special Olympics athletes. Event goodie bags will be awarded to the first 50 participants who sign up. Rods and reels are available for use, but youth are encouraged to bring their own if they own one. All bait is donated by the DMF Bait Company.

The Walmart FLW Tour at Pickwick Lake is presented by Quaker State and is hosted by Florence/Lauderdale Tourism.