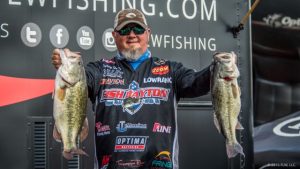 FLORENCE, Ala. (May 5, 2016) – Rookie pro Buddy Gross of Ringgold, Georgia, weighed a five-bass limit totaling 25 pounds, 8 ounces, to take the early lead after day one of the Walmart FLW Tour at Pickwick Lake presented by Quaker State. He will hold a 2½-pound advantage over second place pro Michael Neal of Dayton, Tennessee, (23-0) to start day two in the four-day event that features 163 of the world’s best bass-fishing anglers competing for a top cash award of up to $125,000.

“My home lakes are Chickamauga and Guntersville and it’s the same kind of deal here as it is at home,” said Gross, who rooms with Neal while traveling on Tour. “I’m catching them at their first stop as they’re coming off the spawn. I had six keeper bites today.

“They’re pretty close to the grass,” Gross continued. “I’m catching them in 8 to 15 feet. The grass is growing in 8 foot. I pull up on the grass, and then back out. I’ve got two good places that I fished in the same general area today, but the wind got bad and I know that they got dirtied so I’m not sure what’s going to happen tomorrow.”

Gross wasn’t ready to mention his specific baits or technique just yet but said that he thinks he has keyed in on something different that he is doing different from his competitors.

“I can’t talk about it just yet, but there is a key thing that I’m doing,” Gross said. “I did find a few other areas that looked good, but I couldn’t get close to them today because of the wind. These fish have moved a long ways since practice; I’m hoping I can connect with them again tomorrow.”

Twenty-four anglers had their day one weights disqualified and four were penalized for violating FLW Tour Rule No. 15 regarding late check-ins. The anglers had locked up into Lake Wilson to fish, which is legal, but were unable to get back through the lock on time after an issue with a barge that was locking through. Rule No. 15 states that contestants who are not at the check-in area at the appointed time will be penalized 1 pound per minute, deducted from the total weight. Any contestant more than 15 minutes late will lose credit for that day’s weight.

The top 10 pros after day one on Pickwick Lake are:

Cotten weighed in an 8-pound, 14 ounce largemouth to win the Big Bass Award on the pro side Thursday and the $500 prize.

The top 10 co-anglers after day one on Pickwick Lake are:

Troy O’Rourke of Natchitoches, Louisiana, earned the Big Bass Award on the co-angler side Thursday with a bass weighing 5 pounds, 5 ounces to win the $250 prize.

Fans will also be treated to the FLW Expo on Saturday and Sunday from noon to 4 p.m. at McFarland Park prior to the final weigh-ins. The Expo includes a 100-yard Lew’s Casting Lane, the opportunity to interact with professional anglers, enjoy interactive games, activities and giveaways provided by FLW sponsors, and learn more about the sport of fishing and other outdoor activities. All activities are free and open to the public.

Also for youth, the FLW Foundation’s Unified Fishing Derby will be held at McFarland Park on Saturday, from 9:30-11:30 a.m. The event is hosted by FLW Foundation pro Cody Kelley along with other FLW Tour anglers, and is free and open to area youth 15 years of age and younger and Special Olympics athletes. Event goodie bags will be awarded to the first 50 participants who sign up. Rods and reels are available for use, but youth are encouraged to bring their own if they own one. All bait is donated by the DMF Bait Company.

The Walmart FLW Tour at Pickwick Lake presented by Quaker State and is hosted by Florence/Lauderdale Tourism.