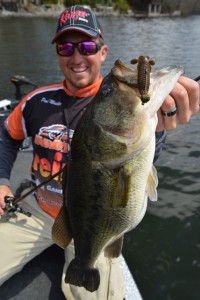 Naugatuck, CT – December 2014 – 2014 B.A.S.S. Nation champion and Bassmaster Classic runner-up, Paul Mueller, recently committed to the Bassmaster Elite Series for the 2015 season. The 30-year-old Southbury, Connecticut native secured his Elite Series invite by winning the B.A.S.S. Nation Championship on the Ouachita River in early November. For Mueller, the timing is right to ascend onto the sport’s highest stage.

“Although I qualified for the Bassmaster Elite Series last year through the B.A.S.S. Nation,” says Mueller, “I think it was smart to wait. Now, I better understand the industry and competition. Qualifying for two consecutive Bassmaster Classics and finishing as a runner-up in this year’s event certainly builds name recognition and demonstrates that you can compete at a high level, but it is more than that. It is about building the brands of your sponsors. I work hard every day to promote my sponsors through social media, instructional videos, guide trips, seminars, and sport shows.”

Even though Mueller looks forward to his first year on tour, he is trying to remain realistic.

While Mueller has assembled some sponsorship support for his professional debut, he still seeks a title sponsor for his team. For more about Paul Mueller, or to view his instructional video series, visit www.paulmuellerfishing.com.