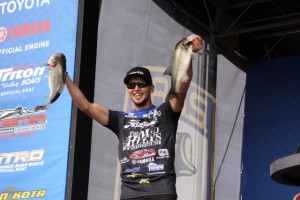 The Mad Hueys, a new and exciting global fishing lifestyle brand, is proud to announce the naming sponsorship of professional bass angler, Carl Jocumsen. In 2014, Carl had his best year of his career and secured his spot on the prestigious Bassmaster Elite Series for 2015. Making history as the first ever Australian to compete against the best bass anglers in the
world.

Carl Jocumsen started fishing bass events in Australia when he was old enough to do so.  At the age of 16, his mother would drive him to the lake to launch his boat and compete as a pro. He won his first event before he had a drivers’ license. Since, he has dominated the Australian bass tournament scene becoming Australia’s #1 ranked bass angler from 2005 through 2010.

Carl got a taste of American bass fishing when he won a trip to fish the US Open as a co-angler in 2009. His Australian bred skills stood him in good stead and a 2nd place finish gave him the confidence to dream about stepping onto the global Bassmaster stage. Now that dream has come true as Carl sets out to take on the best in the world in this year’s 2015 Bassmaster Elite Series.

I’ve never been so fired up to represent a company like The Mad Hueys”, said a pumped up Jocumsen. “With their core base built in Australia where my life roots originated from, their motto ‘Let Us Live’ is something I’ve stood by my whole life. Showing the world that fishing is fun, cool and exciting is what The Hueys and myself live by. Having their support in 2015 is going to make for one exciting year ahead!” Carl Jocumsen

Along with his other credible sponsors, The Mad Hueys will act as foundational support brand to Carl’s quest to become the 2015 Bassmaster Elite Champion. “The Mad Hueys is a brand all about living life to the fullest and Carl is a true representative of just that. He’s a hard core professional with the skills and passion to win but at the same time doing it all with a positive outlook…that’s a Mad Huey and that’s why we’re pumped to be backing him on the Bassmaster Elite Series”, said PJ Connell, The Mad Hueys USA general manager.

The brand is also pleased to announce a fresh, new bass apparel lifestyle collection designed with Carl. Launching on June 1, 2015 via www.themadhueys.com, expect new bass designs on product categories such as headwear, shirts, board shorts and accessories dropping every month.

Check out www.bassmaster.com for a schedule of the 2015 Bassmaster Elite Series and Bassmaster
Open Events to see Carl compete against the world’s best Bass Anglers.

About The Mad Hueys
The Mad Hueys is a brand all about getting up in the morning and looking out the window and saying ‘I’m the maddest Huey in this joint… no barney, no wave, no fish, no boat, no rod, no person, no party can stop us, cause we run with the deepest pack in the business!” “And just in case you forgot what it was, it’s The Mad bloody Hueys.”