Boyd Duckett – Halfway Home and Right on the Classic Cutline

I was posed a hypothetical question the other day. It was about this year’s BASS Elite Series. A guy asked me: Before the season started, would you be happy knowing that after four events you’d be tied for 36th place in

At first, I thought it was a silly question. I know the guy asking the question, and I also know that he KNEW I was disappointed in my finishes at the Guntersville and Havasu events.

But after I thought about it, I knew where the guy was coming from. He understands that I start every year on the slow side.  In fact, even though I’ve qualified for the Classic six of the past nine years, I’ve never been this high in the standings after four events. Every year, I have to scramble during the second half of the season to climb above the Classic qualifier cutline.

So he said, “You’re in pretty good shape this year, huh?”

Well, maybe he has a point.

But, really, what does 36th place at the halfway mark mean?

For starters, even though I’m tied in points with Marty Robinson for 36th place, I’m listed in 37th. What’s funny about that is that 36th is considered above the Bassmaster Classic cutline; 37th is below.

But that’s actually irrelevant (at least for now), because we’ve got four events left. Marty and I will both move either up or down. The primary point is that I’m right on the cutline at the halfway mark.

Another thing being in 36th place means is that I missed a great opportunity to be a lot higher in the standings. I’ve stumbled twice this year, and I written in these columns about how disappointed I was on those two occasions. 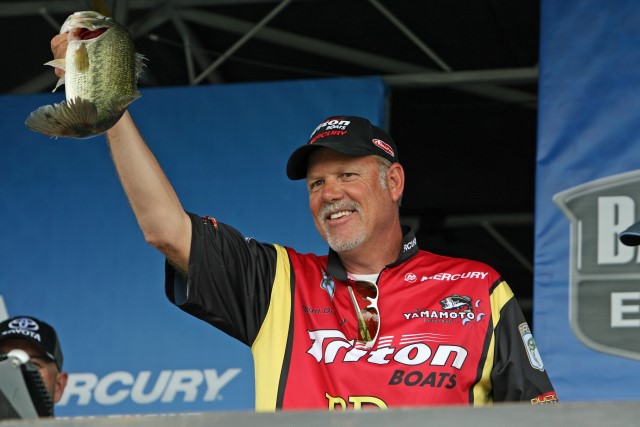 I had bad finishes on two lakes where I should have smoked them. One place was Guntersville, my home lake. I was one of a bunch of Alabama anglers that tanked at Guntersville because we out-smarted ourselves. The fish were, for lack of a better term, out of position. Every safe place we “home boys” looked, the fish had disappeared. Something was off. So we all should have just have figured that out quicker than we did and treated Guntersville like any other lake.

I also missed a great opportunity at Lake Havasu. I had the best practice days I’ve had in years. Then on tournament day, the winds picked up to 35 miles an hour, and I didn’t adjust to the conditions. I was stubborn. I thought I could battle 35 miles an hour of wind and catch the fish I found in practice. It didn’t work.

On the other hand, I had really good events on the Sabine River and in the California Delta, and those two finishes are why I’m tied for 36th and not in 56th or 66th place. I was just trying to survive those two events and earn a respectable place in the event standings.

So if you’re keeping score, that means I had lousy events on the two bodies of water where I felt I could have won – and two good events on water I just hoped to survive.

That brings us to this week. We’re on Kentucky Lake, which is a huge surface-area lake with a lot of possibilities. I feel reasonably confident that if the weather is ok, I’ll be able to catch some good fish.

During the weeks we had off from competition, I kept myself tournament ready by fishing on Guntersville. I spent a lot of time ledge fishing, which is how I think I’ll be able to catch them at Kentucky Lake.

The bad news is that the ledge fishing isn’t there right now.  It’s been cold and rainy, and the fish just aren’t biting. I’m writing this after two days of practice, and nobody that I’ve talked to has been catching them. There is no good pattern yet, as far as I can tell.

So I have two hopes going into this week’s event.

One, I hope the weather improves. If it does, I should be fine. If it doesn’t, a lot of us will struggle.

Two, I hope that the fact that I’ve had two terrible practice days means that I’ll have a good tournament. The way I see it, I thought I was totally prepared at Guntersville and Havasu, and I had bad tournaments. Maybe this time, bad practices mean I’ll have a good event. How’s that for some logic?