The 2013 Rat-L-Trap Classic was held at Lake Guntersville on Feb 2, 2013. Anglers from over 9 states came in to see who would be the best on the Rat-L-Trap that day. Nineteen teams weighed-in over 20lb. bags with the big-­fish weighing 9.6 lbs. And, this was with water temps at 49 degrees and snow coming down in the morning.

Interestingly enough, the team that won it all were two-college students (Taylor Luna and Cameron Gautney) from the Muscle Shoals area. They even fi­nished ahead of the Elite Series Pros. The ‘Trap they used was a custom-painted color that we had never seen before. It was developed by Bob Risner of Florence, AL. The anglers using the bait said the color made all the difference as they couldn’t get bit on their other colored ‘Traps. 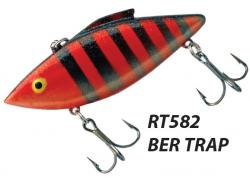 We’re now producing this bait with the consent of Mr. Risner. It’s been titled for his name sake with his initials Bob E. Risner….the BER ‘Trap. We’re taking orders now! Here is the link to the Ber Trap.