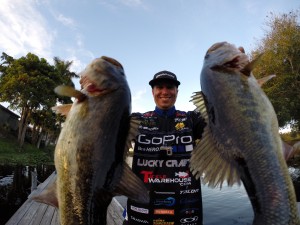 Cypress, Calif – The Daiwa corporation has added FLW Tour and Major League Fishing standout Brent Ehrler to their Pro Team for the 2014 through 2016 seasons. The multi-year deal will have Ehrler using Daiwa rods and reels for the next three years.

Brent Ehrler has 31 FLW Top Ten finishes including eight victories. Among those eight victories is a Forrest Wood Cup title and over two million dollars in career earnings. The Redlands California based professional said, “Daiwa produces excellent rods and reels. I fish for a living and can’t rely on equipment that isn’t at the top of the game. Everything they produce from the new Tatula line through the Steez lineup is fantastic. For the $150 price range there is nothing comparable to the Tatula, and the Steez rods and reels are the best rods and reels money can buy. I look forward to working with them on additional models of rods and helping promote what I consider the best equipment available today.”

Daiwa’s pro team already touts the likes of Randy Howell, Ish Monroe, Takahiro Omori and Andy Montgomery. Daiwa’s marketing manager Curt Arakawa said, “Adding Ehrler was an easy decision. He’s a proven winner that prides himself in using the best equipment available. He will give us additional exposure on both the FLW Tour and in Major League fishing. It’ll be fun watching his career continue to grow with Daiwa rods and reels in his hand.”

Daiwa produces rods, reels, lures and more for fishing for dozens of species of fish. In 2013, Daiwa released the new Tatula line of rods and reels for the bass fishing market. The Tatula reel features a patented T-Wing line winder, a rugged gear train, and a rigid aluminum housing. The Tatula lineup offers anglers of all levels a better performing reel that is built to last and affordable.  The Tatula rod features Super Volume Fiber (SVF) graphite which is lighter in weight and with the X45 BIAS construction the rods are strong and durable.

The Tatula was the latest line of bass specific gear from Daiwa which also includes the Steez, Zillion, Cielo, Lexa, Aird and additional lines.

About Daiwa:  Daiwa has been making innovative products since 1966.  From the very beginning, Daiwa’s emphasis has been upon innovation and quality. The result is a long list of product features, design and materials that have become standards for the fishing tackle industry. It is a long-standing record of innovation, the type of innovation that has left a visible mark on the majority of tackle manufactured today, innovation that continues to advance the sport of fishing. For more information about Daiwa products please visit Daiwa.com.