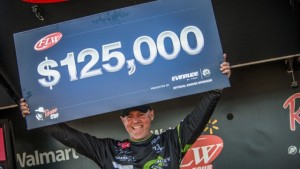 JASPER, Ala. (March 29, 2015) – FLW Tour pro Dave Lefebre of Erie, Pennsylvania, brought a five-bass limit to the scale Sunday weighing 19 pounds, 5 ounces to win the Walmart FLW Tour at Lewis Smith Lake presented by Evinrude. Lefebre’s four-day total of 20 bass weighing 65-5 gave him a 1-pound, 14-ounce margin of victory over second place pro Clark Wendlandt of Leander, Texas, in the nationally-televised event that featured 154 of the best professional bass-fishing anglers in the world competing for the top cash award of up to $125,000.

“I couldn’t sleep last night because I was so excited to go fishing today,” said Lefebre, an 11-time Forrest Wood Cup qualifier. “I wasn’t even thinking about winning the tournament, I just wanted to move up a few spots and cash a nice check. Today was one of the biggest surprises of my entire career.”

Lefebre said that he caught most of his fish this week fishing in the backs of creeks. His plan was to start each day by targeting spotted bass, then move to the largemouth once the sun came up and the temperatures warmed.

“In the mornings I was throwing a white- or albino-colored ½-ounce Fish Head Spin with a Yamamoto D-Shad superglued to it,” Lefebre said. “My goal was to catch one or two keeper spotted bass early and then go looking for the keeper largemouth. The largemouth were in the back of the pockets keying on the blueback herring spawn. The key was to find the pockets that the blueback were in.

“I caught most of my largemouth on a Rapala BX Waking Minnow,” Lefebre continued. “I caught 24 pounds in practice flipping, and I really thought that I would be fishing this tournament with a big jig. But on the last day of practice I started messing around with a few other baits and that’s when I started to get confidence in that BX Minnow. I could make super long casts, and a lot of the fish would track it for 20 feet before they would bite it. The BX is what got me here.”

Lefebre’s strategy paid off, as he managed to weigh in both species each day of the tournament. Of the 20 bass that Lefebre brought to the scale, eight were spotted bass and 12 were largemouth.

“I had an awesome day – two or three of the best things that have ever happened in my career happened to me today – but I really didn’t think that my 19 pounds would win it. Lewis Smith Lake is one of my favorite lakes in the world to fish, and to come down here and get the win is just the best.”

Pro John Cox of Debary, Florida was involved in a single-boat accident on Lewis Smith Lake shortly before noon on Sunday. Cox voluntarily decided to end his day early and not weigh in at the final day weigh-in. Cox decided to seek medical attention upon his return to the ramp. While shook up, Cox has been medically cleared and will compete in the next FLW Tour event at Beaver Lake next month. Cox finished the event in 10th place with 15 bass weighing 45 pounds, 15 ounces and earned $14,000.

The Walmart FLW Tour stop on Lewis Smith Lake presented by Evinrude was hosted by Walker County Chamber of Commerce. It was the second of six regular-season events in the FLW Tour’s 2015 season. The third Walmart FLW Tour event of 2015 will be held at Beaver Lake, April 23-26 in Rogers, Arkansas, and is presented by Rayovac. The event will be hosted by the Rogers Convention & Visitors Bureau. Boats will launch from Prairie Creek Park Marina in Rogers, Arkansas. For a complete schedule, visit FLWFishing.com.