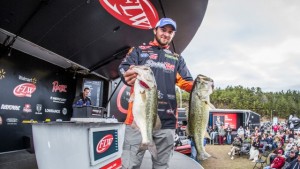 JASPER, Ala. (March 28, 2015) – FLW Tour rookie Zack Birge of Blanchard, Oklahoma, caught a five-bass limit weighing 17 pounds, 11 ounces Saturday to extend his lead in a stacked top-20 field that included five former Angler of the Year winners and four Forrest Wood Cup champions. Birge now holds a 3-pound, 11-ounce edge over his closest competitor, legendary pro Clark Wendlandt of Leander, Texas, at the Walmart FLW Tour at Lewis Smith Lake presented by Evinrude. The field is now cut to the final 10 anglers as they enter the fourth and final day of competition in the event that featured 154 of the best bass-fishing anglers in the world competing for a top cash award of up to $125,000.

“I will probably not be getting much sleep tonight,” said Birge, who finished in 13th place at the FLW Tour season opener at Lake Toho just three weeks ago. “I had no expectations coming in to this event, and I had no idea that this tournament would turn out the way it has so far. It’s been an awesome week. I’m fishing just like I do back home – shallow-water bushes – and just having fun.”

Birge stuck to his largemouth pattern that he has had dialed in all week, even when many of his competitors chose to target the abundant Lewis Smith Lake spotted bass in the morning. He caught two largemouth very early in the day, then another eight to 10 keepers in the afternoon as the temperatures warmed.

“The spotted bass that I have been catching have been small, so I figured that I would try to catch a couple of largemouth early and get a few bonus fish,” Birge said. “I was extremely fortunate to catch two of them early and it calmed me down. I knew the bite would turn on around noon, and it did.”

Birge said that he stuck with the baits he has been working with all week, catching three largemouth off of beds with a lizard, two on a frog and the rest of his keepers on a Santone Lures buzzbait.

“I think with a near 4-pound lead, the plan for tomorrow is to go try and catch five spotted bass right away in the morning and get my mind right,” said Birge. “Once I get five keepers in the boat, I’m going to go sit on my largemouth and make them bite. All that I can do is fish for the biggest bag that I and we’ll see what happens.”

The top 10 pros advancing to the final day of competition Sunday on Lewis Smith Lake are:

Fans will also be treated to the FLW Expo on Sunday from noon to 4 p.m. at the Smith Lake Dam Access prior to the final weigh-ins. The Expo includes a Ranger boat simulator, the opportunity to interact with professional anglers, enjoy interactive games, activities and giveaways provided by sponsors, and learn more about the sport of fishing and other outdoor activities. All activities are free and open to the public.