DeFoe Moves Into Lead in Bassmaster Elite At The Mississippi River

LA CROSSE, Wis. — After claiming second with a 17-plus-pound limit of bass in the first round of the Plano Bassmaster Elite at the Mississippi River presented by Favorite Fishing Thursday, Knoxville, Tenn., angler Ott DeFoe predicted he would catch one more limit at least that big — and that would be it. 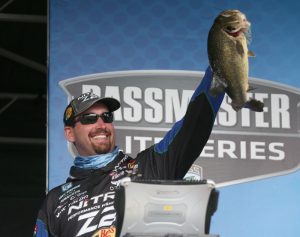 Today he backpedaled on the last part of that prediction, but he validated the first. His 17-pound, 11-ounce collection of five largemouth pushed his two-day total to 35-2 and a sizable (for this fishery), nearly 2-pound lead over his nearest competitor.

“Another catch like that one is possible, but I don’t think you can get more than that,” he said Thursday.

Today, after catching a 6-1 largemouth and four other heavy bass, all but one from one hot spot — under horrible fishing conditions — he changed his tune.

“After today, I know those fish are there,” DeFoe said. “I feel like it’s got more potential. They’re there.”

The big bass, currently leading for the Phoenix Boats Big Bass award, hit late in the day, with less than 30 minutes of fishing time remaining.

Jordan Lee of Grant, Ala., moved up a notch into second with a total of 33-4 after putting on a frog-fishing seminar for viewers of the Bassmaster LIVE program on Bassmaster.com. Lee caught bass after bass on the topwater baits early in the day, just before a broad band of severe thunderstorms settled on the Mississippi River valley. He sought cover under a picnic pavilion during the worst of the storm, and when the rain let up enough, he went right back to the spot and caught his biggest bass of the day, a 4-pounder.

Lee described the two places he’s fishing as small, maybe 50-yard stretches, as “perfect little spots.” He’s hoping they will hold up for two more days of competition, but he isn’t sure.

Seth Feider of Bloomington, Minn., rocketed into third with the heaviest limit of the day, 19-5. The young pro said the nasty weather today caused bigger bass to turn on for him, and he’s disappointed predictions are for more comfortable weather Saturday and Sunday.

He wants to win, of course, but perhaps more than that, Feider is hoping to qualify for the Toyota Bassmaster Angler of the Year Championship to be held next week on Mille Lacs Lake in his home state. He currently ranks 52nd in Angler of the Year points, two spots below the cut.

Reigning GEICO Bassmaster Classic champion Edwin Evers of Talala, Okla., remained in fourth with 30-12, and Alton Jones of Lorena, Texas, another former Classic champion, is tied for fifth with David Mullins of Mound Carmel, Tenn., with 30-7.

The Top 50 competitors here will compete again Saturday, and the field will be cut to 12 for Championship Sunday. Among those eliminated from the Plano Bassmaster Elite today, some will drive a few hours to await the start of the $1 million Toyota Angler of the Year Championship at Onamia, Minn. Some on the bubble will have to wait around to see if they remain in the Top 50 in AOY rankings by the end of this week, and the remainder will be headed home, their season at an end.

The tournament will resume Saturday with takeoff from Veterans Freedom Park at 6:15 a.m. CT. The weigh-in will be held back at the park at 3:15 p.m. The Bassmaster Elite Series Expo will be open at 10:30 a.m. at Freedom Park.