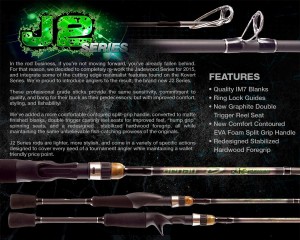 Mountain Home, AR– Premium rod maker Denali Rods has announced the release of the brand new J2 Series of rods. The J2 Series is so named because it is the “second generation” of the original Jadewood series.

The J2 Series rods contain all the incredible features that made the Jadewood series one of the best values in the industry, but with enhanced styling, a new comfort contoured EVA foam handle, and an all new minimalist double trigger reel seat for enhanced feel.

Denali president Scott Estes is ecstatic about the release of the J2 Series, saying “In this industry, you’ve always got to be moving forward, or you’re going to find yourself looking at a competitor’s taillights. Our Jadewood series has always done extremely well, but we felt that they needed a makeover. We released our Kovert series last year to amazing reviews and we wanted to integrate some of that styling into the new J2’s. We think anglers are really going to love the new look, and the best part is that we were able to keep them at the same value price point while adding enhanced features.”

In addition to the new features and cosmetics, the J2 lineup features two additional models;

Denali’s new J2 series will be on display at ICAST in Orlando, FL which is July 16-18.  Denali offers four complete lines of quality rods starting at $99 and their rods come with a limited lifetime warranty against material and workmanship defects. For more information about Denali Rods, go to www.denalirods.com.