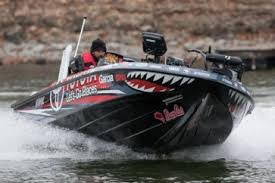 HullSpeed® Performance Marine Coatings have been making boats go faster for over 10 years. Since originating in the high performance yacht racing markets in 2002, HullSpeed® coatings have provided the ideal hull surface for a wide variety of marine craft requiring improved speed, fuel economy and a foul-release, easy to clean bottom. With applications in the commercial, recreational, industrial and government marine sectors, HullSpeed® coatings have established proven improvements in speed and fuel economy by as much as 10%. However, most recently HullSpeed® has targeted the fresh water angling markets. That’s right, fishing.

The US sport fishing market is comprised of over 40 million anglers and is a $70 billion annual industry. The bass fishing segment alone makes up $40 billion of that market with approximately 27 million bass anglers. With over 50,000 fishing tournaments per year, HullSpeed®‘s focus has been on the avid tournament anglers due to their need for speed. And they’re right to want it. The Bassmaster Classic, one of the largest fishing tournaments and expos in the country carries a $500,000 cash 1st place prize with over a  $1.7 million in other cash prizes. So when getting to a fishing spot first could mean catching the fish that wins you $500,000 you’re going want all the speed you can get, and HullSpeed® can provide.

Elite series pro Mike Iaconelli used HullSpeed® on his 2012 tournament boat and picked up 2 mph as well as his 2013 Basscat Puma FTD tournament boat. Randy Howell has HullSpeed® on his 2013 Triton 21HP tournament boat and picked up 1.5 mph as well as a 2 sec faster hole shot. RC Cooper, pro angler from NH picked up 4 mph on his 2008 Ranger Z21 and had a 1.9 sec faster hole shot! Elite Series pros James Niggemeyer, Edwin Evers, Chad Pipkens, Greg Vinson, Pete Ponds, and Byron “BJ” Haseotes are scheduled to have their tournament boats painted for this season. All boats coated with HullSpeed® have seen noticeable improvements in performance as well as greatly improved ease of launching and hull cleaning/maintenance. These boats are coming out of the water cleaner which means they aren’t picking up as much marine growth including aquatic invasive species which is directly helping to protect inland rivers, lakes and waterways.

The contamination of inland bodies of water due to the transfer of aquatic invasive species has been an increasingly concerning topic over the past 10 years. In the northeast specifically, new species such as zebra mussels, Asian clams, quagga mussels, didymo(rock snot), variable leaf milfoil, Eurasian milfoil, red alga, and more, have been irrevocably implanted into many of the beautiful lakes and rivers we call home. Lake George will more than likely allocate a DEC officer to every launch making sure boats are clean before entering the lake this upcoming season.

For further information on how HullSpeed® can help make your boat faster, save on fuel, and stay cleaner please visit www.hullspeed.us or contact a representative at sales@hullspeed.us.