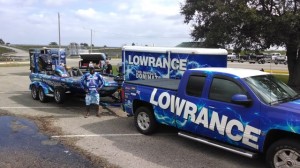 Hughson, Calif. –  February 6, 2014 – It’s no secret that on the pro tours, Ish Monroe is like James Brown was to show business; the hardest working man on tour.  Monroe’s constant efforts at promotion, along with striving to be a dominating competitor on the water have earned him favor with the industry.  Monroe will once again be fishing two tours in 2014.

As Monroe slides his Ranger Z520c / Yamaha 250 SHO into the waters of Lake Okeechobee today for the first day of competition for the 2014 FLW Tour opener, it will be emblazoned in the colors of Lowrance.  Monroe will be running two boats again this season, and Lowrance and their Insight Genesis mapping products have partnered with Monroe as his title sponsor for the FLW Tour.

Lowrance has been a large part of Monroe’s career successes, and he has always been known as one of the first anglers to utilize every technological advantage when it comes to research of the water; so it was a perfect fit to combine Lowrance and Insight Genesis as his FLW Tour branding.

“I wouldn’t have been as effective as an angler without Lowrance Electronics on my boats all these years,” said Monroe.  “Being able to see the smallest changes in bottom depth or composition has been very important to me as a shallow water specialist, and my Lowrance HDS and HDS Touch Fishing Systems have always given me that ability.

He said it has helped him win on tour.  “When I won the Bassmaster event on Lake Okeechobee in 2012, I found deeper water in the areas I was fishing,” he said.  “My Lowrance Fishing Systems picked up the depth and I was able to see that they were abandoned tilapia beds that the bass were using; that was a huge part of my win.

About Ish Monroe
Ish Monroe is a Bassmaster Elite Series and FLW Tour pro who has been competing in professional level circuits since 1995. In that time, he has earned four B.A.S.S. wins, four FLW Outdoors wins, accumulated 32 top 10 finishes, nine trips to the Bassmaster Classic and three Forrest Wood Cup entries; he has also amassed more than $1.75million in career earnings.

Monroe represents some of the finest companies in the industry, his sponsors include: Lowrance, Ranger Boats, Yamaha Outboards, Cocoons Eyewear, Daiwa, Missile Baits, River2Sea, Snag Proof Lures, Maxima, SIMMS, MotorGuide, and Gemini Sports Marketing. visit him on the web at http://www.ishmonroe.com, on Facebook and Twitter.