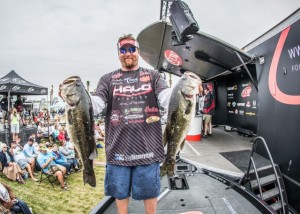 KISSIMMEE, Fla. (March 6, 2015) – Professional angler J.T. Kenney of Palm Bay, Florida, brought a five-bass limit to the scale Friday weighing 22 pounds, 9 ounces to extend his lead at the Walmart FLW Tour at Lake Toho presented by Mercury. Kenney’s two-day cumulative weight of 52-7 gives him a substantial 12-pound, 10-ounce lead over second-place pro Stacey King of Reeds Spring, Missouri, who has a two-day weight of 10 bass worth 39-13 as the tournament heads into the third day of competition. The field is now cut to the top 20 in the four-day event that features 154 of the best bass-fishing anglers in the world casting for the top cash award of up to $125,000.

“It was definitely a little tougher out there today,” said Kenney, who has three career victories in FLW competition. “I went to a lot of the fish that I had marked and a lot of them didn’t bite. Luckily, 22 pounds of them still did.”

Kenney said that his morning bite was extremely slow but improved as the sun came out and the day progressed. He didn’t fill his limit until 11 a.m. today.

“I had five decent bass today, and I had two real good ones get off,” Kenney said. “I’m really doing some serious fish management. I’ve got some back up stuff that’s not spawning fish that I haven’t even touched yet. And I’ve got a lot more spawning fish marked that I haven’t gone to. I don’t think I’ve got anything that will produce another 30-pound bag like yesterday, but I’m going to catch some more good ones.”

The top 20 pros that made the Buck Knives Cut and will fish Saturday on Lake Toho are:

Colson won the Bridgford Big Bass Award on the pro side Friday with a monster bass weighing 11 pounds even – tying the record for the third largest bass ever weighed in FLW Tour competition – to win the $500 prize.

Stefan was named the Buck Knives Cut winner and awarded the limited edition FLW Buck Knife that is given to the 20th place pro following the day two weigh-in at each FLW Tour event.

David Smith of Del City, Oklahoma, was forced to withdraw from the competition due to illness.

“I’m ecstatic right now,” said Randles. “I wasn’t able to catch a limit at all in three days of practice. I wasn’t sure how my week was going to pan out, but to come out here and get the win is just awesome.”

Fans will also be treated to the FLW Expo on Saturday and Sunday from noon to 4 p.m. at Big Toho Marina prior to the final weigh-ins. The Expo includes a Ranger boat simulator, the opportunity to interact with professional anglers, enjoy interactive games, activities and giveaways provided by sponsors, and learn more about the sport of fishing and other outdoor activities. All activities are free and open to the public.

In conjunction with the FLW Expo, the FLW “Get Outdoors. Go Fish!” Youth Fishing Derby will also be held at Big Toho Marina on Saturday from noon – 3 p.m. The derby is free and open to area youth 15 years of age and younger. FLW Tour pros who are not one of the top 20 anglers that make the Buck Knives Cut will be on hand to assist the youth. Pros Rich Dalbey and Todd Hollowell’s “Hooked on Helping” foundation will also be hosting a food drive to benefit the Second Harvest Food Bank of Central Florida. FLW fans who donate five or more cans of food will be entered to win a $50 Walmart gift card.