James Niggemeyer Gets Sexy with 2013 Wrap 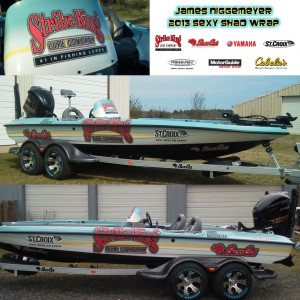 VAN, Tex. –While it was announced a little more than a week ago that 41-year-old Bassmaster Elite Series pro, James Niggemeyer from Van, Tex., got some EGO, when he signed on with EGO by Adventure Products as a new sponsor.  The normally reserved and somewhat subdued angler has decided he needs a little sexy in presenting himself on the water.

No, Niggemeyer is not becoming a different person.  Instead, he is unveiling a whole new color scheme for the Strike King Lure Company Wrap on his Bass Cat / Yamaha tour rig.  For 2013, Niggemeyer will be running a wrap designed to emulate Strike King’s signature lure color – Sexy Shad.

When mentioning the change from his previous hide and go seek graphics packages, Niggemeyer said he thought that there was not a better way to display the Strike King wrap than to use the lure color that the brand is synonymous with.

“Strike King developed the Sexy Shad color, and it is still their most popular color in just about any lure,” said Niggemeyer.  “I thought that there would be no better way to display the company that has been so good to me, than to wrap my boat in the color that they are so identified by.  I really like the way it turned out, and feel that it represents Strike King very well.”

While Strike King and the Sexy Shad theme dominate the hull, his wrap will also feature significant branding for St. Croix rods, Bass Cat boats on the side, and the remainder of his sponsors with placements in the interior.

Niggemeyer is competing on the Bassmaster Elite Series, the Bassmaster Central Opens in 2013 and operates his guide service on the famed big bass factory of Texas, Lake Fork, near his East Texas home.

James Niggemeyer is a 41-year-old pro entering his seventh year on the Bassmaster Elite Series; the world’s most competitive professional tournament trail.  In 95 career professional entries, he has amassed earnings of $550,414.39. His career includes three wins, and 14 top 10 finishes in professional competition.  He was the 2006 Bassmaster Southern Tour Angler of the Year, and the 2009 Bassmaster Central Open Points Champion, as well as a BFL All American Qualifier. He and his wife Sandy have two children, a son Daniel, and a daughter Abigail.