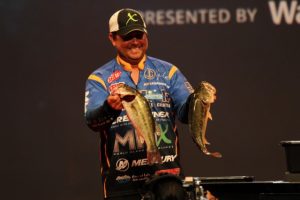 HUNTSVILLE, Ala. (Aug. 5, 2016) – Fifty of the best professional bass anglers in the world continued their four-day competition for the top cash award of $300,000 at the Forrest Wood Cup presented by Walmart, the world championship of bass fishing, at Wheeler Lake in Huntsville, Alabama, on Friday.

After the last fish had been brought to the scale, John Cox of DeBary, Florida, extended his Day One lead Friday by weighing in a five-bass limit totaling 15 pounds, 10 ounces. Cox’s two-day total of 10 bass weighing 32-5 gives him a 6-pound, 7-ounce lead heading into Day Three, with Jacob Wheeler of Indianapolis, Indiana, in second place with 10 bass weighing 25-14.

“Today was pretty good for me,” said Cox, who has already earned more than $144,000 this season in FLW competition. “I caught seven keepers out of the same hole that I was in yesterday. I went past where I stopped yesterday – I hit a couple of logs running in and a couple of logs running out – and I thought it was going to be better, but the fish that I thought were in the back were making their way out.”

Although he was not ready to get specific, Cox said that he caught his fish Friday on two different baits – a topwater and a plastic worm. He said that he planned to start tomorrow in the same location, but wouldn’t hesitate to change things up if he has to.

“Things are going pretty good right now, but you never know what’s going to happen and things could change tomorrow,” he said. “I’ve only fished that one spot so far. I’ve got a backup spot, but I’m going to wait and see. It’s similar, but it’s a different tributary and I’d rather not use it right now if I don’t have to.

“I’m really looking forward to getting back out there tomorrow,” Cox continued. “We’re on the Tennessee River and there are a lot of big fish in this place. I’m going back to the same spot tomorrow and we’ll see what happens. I think that if I can catch 15 (pounds) tomorrow and 10 (pounds) the last day, it ought to be enough to get it done.”

The top 20 pros that will continue to Saturday’s competition on Wheeler Lake are:

Fans will also be treated to the FLW Expo at the Von Braun Center on Saturday and Sunday from 10 a.m. to 4:30 p.m. prior to the weigh-ins. The Expo includes games, activities and giveaways provided by more than 40 FLW sponsors, the opportunity to shop the latest tackle and outdoor gear from more than 100 exhibitors, Ranger boat simulators, a casting pond and a trout pond for children, as well as the opportunity to meet and interact with top professional anglers, including Hank Parker, Jimmy Houston and Byron Velvick. FLW’s namesake Forrest L. Wood, the legendary founder of Ranger Boats, will also be greeting fans.

On Saturday and Sunday the first 500 children 14 and under each day who are accompanied by an adult will receive a voucher to redeem for a free rod and reel combo courtesy of WHNT News 19 after the evening’s weigh-in. Also on Sunday one lucky fishing fan will win a brand new Ranger Z521C bass boat with a 250-horsepower Mercury outboard motor courtesy of WAFF 48. The Ranger Boat giveaway is free to enter but the winner must be present at the conclusion of Sunday’s final weigh-in to win.

Also on Saturday and Sunday, FLW fans will be treated to the Bass & BBQ Festival in conjunction with the FLW Expo. The BBQ Festival, presented by WQRV 100.3 The River, will feature four award-winning BBQ teams offering delicious fare to visitors at the Forrest Wood Cup. A portion of all proceeds will be donated to local Alabama charities.

Country music superstar Dustin Lynch will perform a free concert on the Walmart weigh-in stage at the Propst Arena on Sunday starting at 4 p.m., prior to the final weigh-in. The concert is presented by WDRM 102.1 radio. Lynch occupies a unique place in today’s country music. Thanks to his classic sensibilities, he’s been heralded as the heir to George Strait’s throne. Yet with one listen to, “Where It’s At” it’s obvious the young Tennessee native knows how to combine his traditional influences with an edgy intensity that places him at the vanguard of today’s contemporary country scene.

The 2016 Forrest Wood Cup at Wheeler Lake presented by Walmart is being hosted by the Huntsville/Madison County Convention and Visitors Bureau.