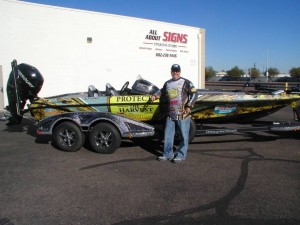 Phoenix, Ariz. – February 6, 2014 – On the eve of the first FLW Tour event of 2014, and only two weeks until his seventh appearance in the Bassmaster Classic, John Murray, professional angler from Phoenix, Ariz. is proud to unveil his new website for 2014.

Along with a redesigned web presence at www.johnmurrayfishing.com, Murray announces that he will be competing on both the Bassmaster Elite Series and FLW Tours in 2014.

Murray has been a professional angler his whole professional life, and as one who has invested more than 30 years into the profession, it should come as no surprise that he is competing on both tours.  In doing so, Murray will be representing new partners, and be carrying a new title partnership with Lucas Oil’s Protect the Harvest throughout the season on his Ranger Z521c powered by Mercury Verado 250 Pro XS.

Murray has also added new partners for the 2014 season, Murray has added Plano and Frabill, the leader in organization and fishing accessories, as well as Blackwater Toray, one of the truly premium fishing lines from Japan to his partner roster.

He expressed his gratitude for his new partners, as well as those that have stood behind him for so many years. “As a professional angler, sponsors are our lifeblood, and I have been proud to represent some of the finest around,” said Murray.  “I am so proud to welcome Plano, Frabill and Toray to ht team, and honored to be representing a great organization like Protect the Harvest; who stands up for agricultural professionals and outdoorsman.”

Coming off of a true comback season in 2013 that saw him finish 17th in the Elite Series points standings, and second in the Toyota Texas Bass Classic, Murray is excited about this year.  “I look forward to 2014 being one of my best seasons yet,” said the Phoenix, Ariz. Pro.  “I love to fish tournaments, and being in a position to compete on two tours is something I’ve been wanting to do for a while.”

Look for Murray at tour level events across the country throughout the 2014 season.

John Murray is one of the most celebrated professional anglers to ever come from the Western United States.  He is a two-time Bassmaster Winner, an FLW Outdoors winner and a two-time U.S. Open Champion.   He has qualified for the Bassmaster Classic seven times and the Forrest Wood Cup once.  Along with his tour statistics, Murray is the only angler to have won a fully rigged boat on every major waterway in the Western United States; he is a six-time Bassmaster Classic qualifier and has earned more than $2million in career earnings.  Murray lives in Phoenix, Ariz., is married to his wife Amy and has one son; TJ.