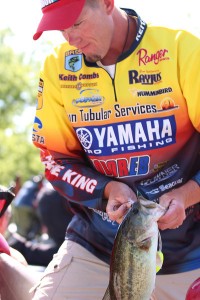 Woodlands, TX – BLV Enterprises, Inc. a landscape design & build company has announced its second corporate sponsorship of professional angler Keith Combs. BLV was founded and is still owned by Brian Vonderau and has been serving The Woodlands and Conroe areas since 1982. The BLV logo will be on Keith’s boat, truck and jersey for the 2013 season.

Brian Vondereau of BLV Enterprises said, “”It was incredible being one of Keith’s sponsors last year. He was an invited guest and sponsor to the first BLV Enterprises Memorial Day Wounded Warrior Crappie Tournament.  The tournament was held on Lake Texana and was hosted by KC’s Bar in Ganado, Texas. Keith was a huge hit with the kids, other fisherman and everyone involved. It’s a lot to ask of a professional angler during the middle of his fishing season, but Keith was more than happy to join us for the event and be a big part of the tournament’s success. He’s a true professional and quickly become a true friend. All of the employees, friends and customers of BLV Enterprises would like to wish Keith a great 2013 season.”

Combs stated, “I met Brian of BLV Enterprises a few years back at the Toyota Texas Bass Classic and we immediately became friends. Brian is a remarkable guy with a huge heart. His support both as a sponsor and a friend means a tremendous amount to me.  The Memorial Day Wounded Warrior event is a fantastic event that Brian works very hard to put together. His desire to raise money for the Wounded Warrior organization is a perfect example of the kind of person he is.  I am looking forward to helping with the event again this year in Ganado and hope we can raise even more money than we did last year for a great organization.