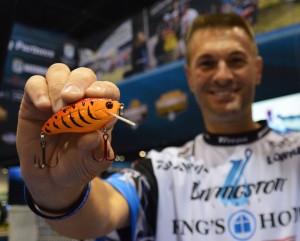 ORLANDO, Fla. – When 2014 Bassmaster Classic champion Randy Howell set to work on a bait that would tighten the action of the wide-wobbling Howeller Dream Master Classic (DMC), the first thing the Team Livingston design team did was tear off the DMC’s bill and engineer the bait with a circuit-board squarebill that would (in theory) radically change the way the bait swam.

Theory became reality the second the final version of HOWELLER DMC SQUAREBILL (SQ) hit the water during Team Livingston on-the-water testing. The original DMC’s wider wobble was immediately replaced with a wicked-tight wobble and a sneaky new side-to-side darting or “hunting” action that almost caused the bait to roll off the production line with a new name.

“The HOWELLER DMC SQ is such a hunter that we almost named it the ‘Howeller Hunter’,” jokes Livingston Lures creator and lead bait designer Robert Castaneda. “When we started to brainstorm new baits, Randy wanted a bait that had a crazy-tight wobble, but in the original Howeller DMC body. Other members of the Team Livingston pro team also agreed that we needed a new squarebill, and the first time we put the HOWELLER DMC SQ in the water, we knew we had it right.”

The HOWELLER DMC SQ starts with the 2 ¼-inch Howeller DMC body, and includes all of the characteristics that make the original the most effective medium-diving crankbait on the market: the same herringbone belly and realistic fish-scale back, and the same Gill Marks and Lateral Line™ “cuts” down the side of the body that amplify the bait’s sound and more effectively reflect natural light.

The DMC SQ’s difference-maker, though, is the thin circuit-board bill, which produces such a dramatically extreme right/left darting action and tight vibration at its 4- to 6-foot diving depth that it’s almost impossible to burn the bait too quickly.

“The HOWELLER DMC SQ has by far the most erratic vibration of any shallow bait I’ve ever thrown,” Howell says. “The circuit-board lip has slightly rounded edges, so it can deflect off of cover, and it’s slightly heavier than the DMC so you can make accurate, long casts. We spent a lot of time putting this bait together to get a unique action, and we nailed it.”

The HOWELLER DMC SQ is slightly unique in the Team Livingston lineup, too: It’s the only bait that operates with Livingston’s innovative Electronic Baitfish Sound, EBS MultiTouch Technology™ and NO additional beads or rattles.