Beyond the Pond – Bobbi Chapman

Along with police or fireman, doctor or nurse, ballerina and cowboy, young children typically rank being a pro sports figure in their top five for what they want to be when they grow up. For most, the reality of living the dream of a professional athlete does not come true and can often be discouraged by family and teachers. However, an elite few do rise above the rest to make it to the top.

While passion, drive and commitment are key components in that path to a successful professional sports career; team work cannot be overlooked, as explained in the above quote by Basketball Hall of Fame Coach Wooden.
Although it may look like a solo exploit, the pursuit of a being a bass pro does rely on teamwork for most.

The achievements of Elite Series pro Brent Chapman from Lake Quivira, Kan. is no different, and the teamwork that his wife Bobbi brings to their business affords Chapman the ability to focus on what he does best… fish. 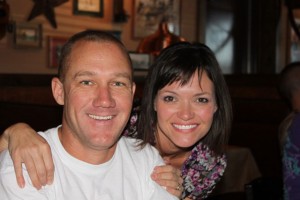 Even in their early dating life, it was clear that her potential husband intended to fish for a living. Finding out that her new beau had no other career ambition than bass fishing; to her meant he would be unemployed. Looking back on that time she stated, “I had no idea what would be involved”.
Chapman began his full-time life on the road; while the soon-to-be Mrs. Chapman completed her college education. The degree she earned in communications gave her the background that would soon become the backbone of the business portion of fishing that surrounded his career.

By the year 2000, Chapman was well into his bass fishing career and the long time couple tied the knot. Following the wedding, the newlyweds began traveling together. Remembering the first six months of being on the road, Mrs. Chapman said it was a big adjustment, “I felt like I had no job, that I wasn’t a partner; I had to learn to change from an I to a We.”

It took some time to understand that she was part of the team and that the business part of her husband’s career was her job. She soon became his right hand and took over all of the travel plans, public appearances, accounting and all other aspects of business the industry requires. Mrs. Chapman stated, “It took me a couple of years to fully adjust and finally I knew my job was to make his job easier, because his job was to win the money.”

As a youngster, she couldn’t have predicted what her life would become, “I always knew I wanted to be a mom but I never dreamed I would be one while traveling all the time or while home-schooling children.” Although it wasn’t something she anticipated, Mrs. Chapman did become a home-schooling mom as the couple added two children; Mason and Makayla to the mix. She looks back on her life’s dreams and said, “I never thought it would be two kids, me, a dog and a husband in a camper but I love the duality of the traveling life.” 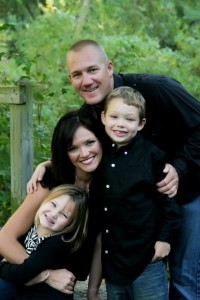 She looks fondly on her two existences, on at home in Kansas, the other on the road, Mrs. Chapman said she has a group of friends back home and a wonderful family of friends she holds dear on the tournament trail. She says her children feel the same, loving both ways of life. At home with their schools, teachers and socialization in Lake Quivira and the adventure and close friends they only see during the tour.

With education always being a priority, Mrs. Chapman said that they evaluate the travel plans each year to ensure that the time on the road is still in the best interest of the children.

When asked if she thought either of their children would pursue the same career as their father, she stated, “The kids both have an adventurous spirit and I would be more surprised if they didn’t.” Explaining she wouldn’t mind if her son or daughter chose an occupation that provided a nomad lifestyle. She added, “If it is something you really care about and are fortunate enough to find a passion for, you should go after it, as long as it is in good character.”

Describing her days on the road as chaotic, she also says she loves it. While she remarked it would be easier to be an at-home, stay home mom, she believes the most important thing is being together as a family. A typical day has her up early with her husband, helping him to blast off. She follows that with the other women in a Bible study group. The kids homeschool from 8:00AM until lunch; where fishermen’s families socialize and eat together. After lunch are group activities including exercise or field trips until the fishermen return; then back to business. Mrs. Chapman cooks dinner, helps with tackle and fits in the business operations between the needs of her husband and children.

She explained how the camaraderie of the wives, saying they work together often; “it’s nothing for one of us to make a Wal-Mart run for an entire campground,” she said of her on the road family. “I think nothing of leaving the kids with one of the wives and making a three-hour drive to find a special lure for Brent.” 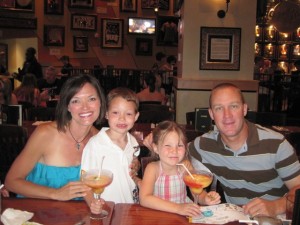 Filling her day with the job of raising her children and running the fishing operations, Mrs. Chapman doesn’t have much spare time; but she does make time for her own interest, running. She and 11 friends from the tour recently completed a 200 mile, overnight relay race from the Gulf of Mexico to Daytona Beach in Florida, called the Ragnar Relay Series. She is looking forward to participating in two more next year.

She said her own passion is her children, she expressed that her foremost aspiration was to fulfill her job in raising “happy children that grow, prosper and are happy in themselves.” She continued to explain she wanted to raise her son to be a good honorable man and her daughter to be a strong woman of character that wouldn’t fall to peer pressure.

Mrs. Chapman described her husband, saying his integrity was what she was drawn to from the beginning, and that is so much more important than his career goals. She stated, “I picked him because of his true character. He was someone I could completely trust, knowing he would have my back no matter what.” She said “I feel; as a mom, it is my job is to raise my children to be the same kind of person and that is my passion”.

Although she is very proud of her husband’s ten years as a Bassmaster Classic qualifier, Mrs. Chapman explained that her proudest moments are not when he is on stage, but rather when a co-angler shares what a great day they had with her husband and what an awesome person he is. She stressed, “a compliment about how he treats others is more important to me than any trophy.”

Discussing the ups and downs of a life in the bass fishing industry, Mrs. Chapman has accompanied her husband through good and bad days. Knowing that “you can’t win ‘em all;” she said her place is to let her husband know she is there for him, regardless of his place on the leaderboard. She stated, “He knows if he did well or not, his friends know and his sponsors know; it is a lot of pressure. I try to keep an even keel and let him know he can only give his best and do all that is in his power to catch fish,” she commented. “That is all he can do; the rest is up to other elements. That is the life of a pro fisherman.”

Explaining even with the consistency of her husband’s performance on tour; finances, sponsor support and economic times change. Sometimes, they have scraped pennies and other years have been more than comfortable.

As she talked about times today, she stated, “We have a new appreciation of what is enough to get by.” She advises new touring couples to plan ahead; make a five-year plan and commit to it as a business. She also stresses open communication between the couple and commitment to work on the business together, remembering what is important. “Material items are just that,” Mrs. Chapman continued to say. “You have your health, family, necessities and get to live the dream; take care of each other and God will do the rest.” 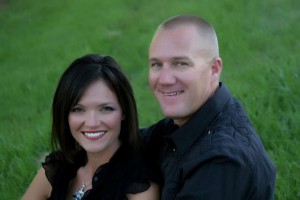 Mrs. Chapman foresees her family being on the bass fishing road until retirement and looks forward to continuing the life as an adventure that allows their family to travel the country. She describes it as, “an awesome adventure seeing America and such a blessing.” As for her thoughts on the remainder of her husband’s career, she stated, “He has the ability and drive to win the Classic and when it is his time, he will.”

There have been less than three dozen men in the world to take that title of the Bassmaster Classic champion. It is an uncommon result; however it does appear that the Chapmans illustrate the teamwork that Coach Wooden describes as the fuel for attaining that uncommon result.

For more on the Chapmans, visit them on the web at: www.brentsbassline.com.