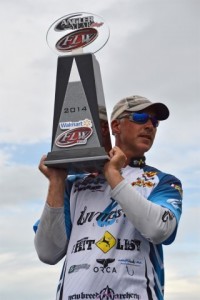 PARIS LANDING, TN – If you’ve already won one FLW Tour Angler of the Year award and earned the nickname “The Greatest Of All Time”, how do you possibly top it? If you’re Team Livingston pro Andy Morgan, you have the best season in FLW Tour history and become only the second angler to ever win back-to-back AOY titles, that’s how.

Morgan, one of the senior members of the Livingston pro team, locked up his second consecutive AOY award this weekend at the FLW Tour finale on Kentucky Lake with a 14th-place finish that catapulted him to the highest single-season points total ever (1,132 out of a possible 1,200) in the 18-year history of the Tour, and made him the only repeat winner besides the Tour’s all-time leading money winner, David Dudley (2011-12).

“I’m already a lucky dude to do what I love for a living, but this has been one amazing season,” Morgan said as he sat on the bait-strewn front deck of the Team Livingston Bullet 21 XRS. “I felt coming into the season that I could do pretty well, but I never expected the season to play out like it did. To win an Angler of the Year, you can’t afford to slip up even for a half a day, and I had to work every minute of every tournament. Look at all the gear thrown around this boat – I work the heck out of my gear, dude, and there’s no way I could even think about an AOY if I wasn’t throwing the best gear out there.”

And a critical piece of Morgan’s gear list in 2014 was a handful of Livingston Lures baits.

Morgan started off the 2014 season with a decent finish (13th) on a shallow-grass/flipping fishery at Lake Okeechobee, but made the statement that he was gunning for AOY with a second-place finish at the next tournament, on Lake Hartwell in South Carolina. Amid a field of over 150 pros and another 150 co-anglers, Morgan plucked three critical largemouth out of Hartwell with a Dive Master 14 with EBS Technology™. Morgan was far from the only angler throwing a mid-depth crankbait, but the Chartreuse Sunrise DM-14’s baitfish-imitating sound technology played a huge difference in Hartwell’s chilly late-winter water.

“Fish can’t hide from this technology,” Morgan said. “I cannot tell you how much of a difference it makes to throw a bait that perfectly imitates the sound of a distressed baitfish. We’ve been catching fish for decades with baits that make noise with plastic and BBs, but an actual baitfish sound? That puts a bait on a whole different level.”

Morgan leaned on the new Howeller in Melon Shad – the bait that helped Livingston teammate Randy Howell win the 2014 Bassmaster Classic – to help wrap up the AOY at the Kentucky Lake season-ender. While the rest of the field was focused almost exclusively on working jigs, Carolina-rigs, drop-shots and 8-inch spoons, Morgan snuck the Howeller into the rotation on a critical Day 2, where he weighed in 21 pounds, 6 ounces to virtually guarantee the AOY.

“That was an important part of this tournament,” Morgan admitted. “At one point that day, it felt like the wheels were falling off. That (Howeller) fish was a 3 ½- or 4-pounder. It was a big deal.”

Morgan will now focus his attention on ICAST in Orlando, FL – where Team Livingston will reveal 12 new baits utilizing EBS Technology™ – and then the Forrest Wood Cup, Aug. 14-17 at Lake Murray in South Carolina. Morgan and 44 other anglers will compete for $250,000 and the Forrest L. Wood Trophy on a fishery that will, as Morgan points out, “fish from the surface to the bottom.”

“From topwater to the deep, deep stuff and everything in between, August on Lake Murray is a wide-open game,” Morgan said. “You better pack all your gear and all your technology, and I promise you, I’m going to throw the hell out of a bunch of Livingston baits, especially the new popper that we haven’t revealed to the world yet. We’ll announce all that in July, by the way, and I think it’s going to be a game-changer.”

About Livingston Lures EBS Technology™: Livingston Lures’ Electronic Bait Fish Sound, EBS Technology™, is the future of fishing. Each lure is engineered with an internal circuit board that produces the actual sound of a distressed bait fish, which naturally draws fish to it much more effectively than baits designed with just rattles. EBS Technology™, combined with the most forward-thinking design process in the fishing industry, provides anglers around the world with the most effective fish-catching tools on the market.