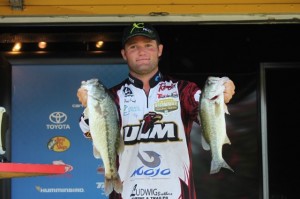 HIAWASSEE, Ga. — If you look at all the setbacks that Brett Preuett suffered throughout the course of the Carhartt Bassmaster College Series Classic Bracket, you’d be as shocked as he was that he made it past the first day. Before today, he lost fish, missed fish, had a giant treble hook buried in his skull and nearly fell into Lake Chatuge chasing a rod that he eventually lost. But, today everything that could’ve gone his way went his way.

“Today is the best day of my life by far, everything just sort of happened for me,” he said. “I had fish hooked with just one hook and landed them, and I got everything in the boat. It was meant to be.

“It’s been a long week. I’ve had hooks in my head, and there have been some long days on the water, but it’s all been worth it,” he said. “We’ve been here for nine or 10 days fishing, and you definitely have to earn it to get here. Every year, every pro is fishing for the chance to compete in the Bassmaster Classic, so to get that opportunity to go is great.”

Next year’s Classic is on South Carolina’s Lake Hartwell, a body of water that Preuett is unfamiliar with. But, he plans to be ready.

“I guarantee that I’ll put in the work to do good,” he said.

Preuett relied on a trio of topwater baits for his catch during the Classic Bracket, including a Lucky Craft Sammy, a Triton Mike Bucca Baits Bull Shad and an Academy H2O Express prop bait. He also caught a few fish on a drop shot rig and Fish Head Spin the first two days of the bracket.

“I was just waiting each day for the schooling to start,” he said. “I had so many hit it and blow up on it and not get hooked, and some that came off each day, but not today. The big ones that ate the bait today got to the boat. With the Lord’s blessing, I fished clean today for the first time.”

Besides the berth in the 2015 Bassmaster Classic on Lake Hartwell, Preuett also won the use of a 2015 Toyota Tundra for a year, a Nitro Z8 with a 250-horsepower Mercury Optimax ProXS, as well as $7,500 from Carhartt to be used as an entry fee for the Bass Pro Shops Bassmaster Opens division of his choosing.

“I want to thank everybody, my family, Jackson (Blackett) and my friends for all the texts and phone calls I’ve gotten,” he said. “They’re the drive that keeps me going. I won’t ever quit, and I want to make it as a professional fisherman. It’s awesome to be able to win for everyone.”

For Preuett to win, Bethel University’s Zach Parker had to lose. Parker was the most consistent angler in the field, weighing in close to 10 pounds each day. However, since the weights did not accumulate in the bracket, his multi-day totals couldn’t carry him to the win. Every fish that Parker weighed in ate a drop shot rigged Roboworm in prizm shad. He saw nearly all of them on his depthfinder.

“Lowrance electronics are so good that you could see everything that’s down there,” he said. “Each day, as a team, we were one of the most consistent, and I carried that into the bracket. I was so blessed this week. So much of the stuff that happened this week would not have happened if I hadn’t been guided that way.

“Things might not have turned out the way I wanted them to today, but the Lord’s blessed me with this great opportunity, and I’m going to make the best out of it.”

Yesterday Parker said on stage that the lake is changing, and he was correct. The bigger pelagic fish were more active and aggressive today, which played to Preuett’s favor.

“When I left the dock this morning, I said that I didn’t want to have any regrets, and I don’t,” he said. “I started the day with four keepers including one good one, and I wasn’t fishing for those schooling fish, so I couldn’t just go out and try to find them fresh today. I had to stick with what had been working for me. Those schoolers just turned on, and I knew that if he got them on the boat, he’d have a big stringer.

Although today marks the end of his collegiate fishing career, Parker plans on taking on the Bass Pro Shops Bassmaster Opens circuits to make a go at a career.

“I want to thank everyone who’s been there for me through all of this, especially my family, friends, Matt (Roberts) and my sponsors, Triton, Mercury, Strike King and T-H Marine,” Parker said.