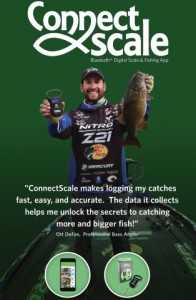 Blountville, TN – When introduced to new technology a fisherman will immediately ask one important question – Will it help me catch more fish?

In the world of fish scales the answer has always been a simple NO. Scales simply provide a reading of how much a fish weighs and that’s it. But now with the new Bluetooth 4.0 technology-enabled ConnectScale and its free app it is now a YES.

So the next question is – How will it help me catch more fish?

The answer lies in the new technology that gives ConnectScale the ability to perform a host of tasks that were all manual previously. Most fishermen love new gear and new technology and ConnectScale is on the cutting edge of it with its scale and app. To ensure the technology was relevant, functional, and accurate (translating to fishermen catching more fish) the company turned to their fellow Tennessee resident and professional angler Ott DeFoe for help. Fishing fans know DeFoe from the Bassmaster Elite Series®, The Bass Pros® television show, and Major League Fishing®.

“There are benefits to the ConnectScale that will appeal to a wide variety of people,” said DeFoe. “It is very helpful for most fishermen honestly. Personally, I love the speed at which the scale and app work together to capture key factors and track my catches. That’s a huge time-saver for me.”

DeFoe said of the ConnectScale process, “Upon weighing a fish the app captures the fish’s weight, time of day, air temp, and GPS location automatically over Bluetooth. Right then or later I can then enter the species, length (using a tape stored in the scale) bait/lure, fishing technique, and water temp. I can also include a photo and any relevant notes I want to make about the catch.”

“Using this data I track my fish catches and key in on patterns and trends that the data shows me,” said DeFoe. “This data helps me establish patterns for future trips and catch more fish.”

“The Tournament feature is a great tool for competitive anglers like me who are culling fish during the day. The app makes calculations and prompts me which fish to cull,” commented DeFoe. “I also know the exact weight I have for the day and know which fish in my livewell is the smallest and next to be culled based on the color of its cull tag.”

“I’ve fished several tournaments with the ConnectScale and we continued to make improvements and tweak the tournament feature. We have it dialed in now and it is a big help during the day. It’s very simple to learn and use too,” said the 2011 Bassmaster Rookie of the Year.

Ben Arnold, the Owner/Founder ConnectScale, LLC, had this to say. “I’ve enjoyed working with Ott and greatly appreciate his help with this project. He has provided invaluable feedback on the scale and made some great suggestions during the development process of the new Tournament Culling Feature.   Ott is the ultimate professional, both as an angler and as a business partner.  We are very excited about this long term relationship with Ott and look forward to continuing to leverage his world-class fishing experience and knowledge as we continue to grow and develop new products.”

ConnectScale is an innovative fishing tool that combines a digital fishing scale with Bluetooth 4.0 technology to transmit data to the ConnectScale Mobile app.  Using ConnectScale, anglers are able to weigh their catch using a 55-pound limit, water-resistant scale which automatically transmits the weight and air temperature data to the mobile app. The data is then combined with the date, time, air temp, and GPS location of the catch through the app which creates an entry in a catch log in which anglers can add lure type used, species caught, photo of the catch and other critical catch data.

Cloud-based storage lets users access their ConnectScale data from any iOS and Android device, allowing anglers to identify patterns and share stories and photos on social media through Facebook, Twitter, or Instagram.  The new Tournament culling feature that was recently launched in December helps anglers capture and analyze catch data when fishing in tournaments. The feature allows anglers to easily track and manage their catches and sends push notifications on which catches should be kept, culled, or released.

The app is available for free download in Google Play and Apple App Stores.

Founded in 2015, ConnectScale, LLC is a Tennessee-based, fishing analytics and product development company dedicated to providing tools for recreational and tournament anglers to make fishing experiences more efficient and enjoyable. To find out more about ConnectScale, visit their website www.connectscale.com, Facebook page, or email info@connectscale.com.