By Daniel Quade – courtesy of PRADCO

Late summer into early autumn can be a tricky time to tackle walleyes, as wandering ‘eyes transition between their summer and fall seasonal haunts. But with the right game plan, anglers can still enjoy some of the year’s finest fishing. 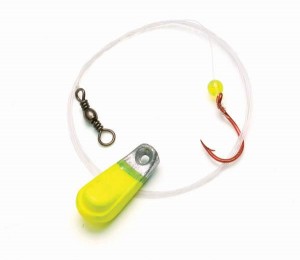 Walleye sage and longtime northwoods guide Bill Rosner knows the drill. Three decades of putting clients on fish across the upper reaches of Wisconsin and Minnesota has taught him plenty about tapping into the early fall bite.

From late August into mid-September, he targets classic late-summer structure such as the fish-rich transitions from rock to sand or gravel, typically in 24 to 32 feet of water.

“Rigging nightcrawlers is the way to go right now,” he says. He nose-hooks a ’crawler on a size 4 red hook, which trails along tethered to a long snell like the 42-inch Lindy Rig X-Treme. If bait-snipping crayfish are present, he opts for the rig’s floating version to keep his ’crawlers out of harm’s way — at least until a walleye can find them.

“With either the floating or standard rig, a 3/8-ounce walking sinker is perfect for maintaining bottom contact in these depths, at speeds of .4 to .8 mph,” he notes. “I use my electric trolling motor to idle along transition lines, watching the sonar for baitfish and walleyes.”

As water temperatures cool down, typically around the third week of September on Rosner’s home waters of Minnesota’s mighty Lake Vermilion, walleyes shift toward deeper structure. “Pinch areas, like troughs that connect sunken humps — or saddles between the tip of a long point and a sunken island — attract baitfish and larger predators,” he explains. Depths of 32 to 35 feet are common.

Here, too, Rosner gives rigging the nod, though he benches ’crawlers in favor of lively, beefy minnows. “I use the same rigging setup, only with a larger, size 2 hook and a half-ounce walking sinker,” he says. Redtail chubs are hot baits in autumn, attracting the attention of hungry ’eyes that are feeding heavily in the cooling water.

Rosner commonly nose-hooks his minnows, being careful to keep the bait alive, but he sometimes experiments with tail-hooking for a different presentation. Using a 7-foot, medium-light spinning combo spooled with 6- to 8-pound Silver Thread AN40, he drops the rig to bottom, then lets out about 10 feet of extra line and begins slow-trolling at the same pace he uses for ’crawlers, up to .8 mph max.

“Don’t close the reel’s bail,” he cautions. “Keep it open, holding the line with your finger. When you detect a bite, feed the fish line until you think it’s time to set the hook.” The severity of the strike—along with how much time to allow before closing the bail, reeling down and driving the hook home—depends on the walleye’s mood. “Some days the fish really nail it, and you can set almost right away,” he says. “Other times, a bite feels like you snagged a wet towel, and you have to wait. I’ve waited as long as a minute-and-half before setting the hook during tough bites.”

Redtails often betray imminent strikes as they get nervous and panic when eyeballed by a hungry walleye. “It’s a really good sign when your rodtip starts to shake,” he grins. “You know a walleye is moving in for the kill.”

The deep-rigging game is deadly all day, but at first and last light, Rosner fires up his kicker motor and speed-trolls crankbaits in shallower water.

“The same types of pinch areas are good, but I’m targeting depths of 12 to 18 feet, when the fish are a bit shallower during these low-light periods,” he explains. 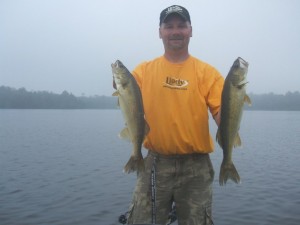 A host-of true-tracking cranks catch fish while he trolls at a quick pace. His favorites include Lindy Shadlings and Cotton Cordell Walleye Divers in “perchy”-looking patterns, which mimic the predominant forage.

“I use a line-counter reel to long-line baits about 120 feet out, on 6- to 8-pound Silver Thread, without any extra weight,” he says. “The baits should run close to bottom — within a foot or two of it — without grinding the whole time.”

Rigging and trolling are two solid options for early fall walleyes, but veteran guide and tournament angler Dan Palmer adds casting crankbaits to the mix, particularly when he focuses on ’eyes patrolling windswept rocky shorelines on Lake Wisconsin in the south-central portion of the state.

“Breaklines and channel edges are good later, when the water temperature drops to about 55 degrees,” he said. “But in early fall, shallow rocks lying just off the main lake’s shores are still red hot, especially when the wind is blowing into them.”

Key depths run 3 to 5 feet. To avoid spooking skittish fish in such skinny water, Palmer fires long casts. He also fishes parallel to shore—which keeps his bait in the strike zone virtually the entire retrieve. Round-sided, shad-style cranks like the Bomber Model A, up to about 2 5/8 inches in length, are his favorites. “Crayfish patterns are killers,” he notes.

His favorite presentation is a stop-and-go cadence that imparts erratic action—what Palmer calls “erraction” — to mimic the darting gyrations of skittering craws and fleeing baitfish. “When I feel the lure contact structure, I stop and let the bait rise, then reel down again and continue the retrieve,” he explains.

The shallow rock pattern typically holds water through September. As it fades and the water cools, Palmer begins trolling deeper-running crankbaits on lead-core line along channel edges. But that’s a story for another day.

For now, the casting, rigging and speed-trolling tactics he and Rosner outlined above offer anglers a three-pronged attack for taking walleyes on a variety of waters throughout the early days of autumn.