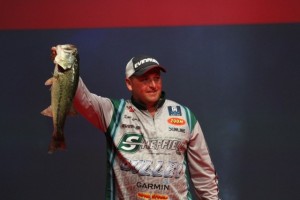 HOT SPRINGS, Ark. (Aug. 21, 2015) – Fifty of the best professional bass anglers in the world continued their four-day competition for a top cash award of $500,000 at the Forrest Wood Cup presented by Walmart, the world championship of bass fishing, at Lake Ouachita in Hot Springs, Arkansas on Friday.

After the last fish had been brought to the scale, Ramie Colson Jr., of Cadiz, Kentucky, grabbed the lead by weighing in a five-bass limit totaling 17 pounds, 4 ounces – the heaviest stringer of the tournament thus far. Colson’s two-day total of 10 bass weighing 31-1 give him a 2-pound, 13-ounce lead heading into day three, with Brad Knight of Lancing, Tennessee, right behind him in second place with 10 bass weighing 28-4.

“I had about 12 or 13 pounds in my livewell this afternoon and was already having a pretty good day,” said Colson, who has earned more than $645,000 in his 11 years as a professional on the Walmart FLW Tour. “I told my co-angler that if I could get a big fish right now, it would be a game changer for me. Then the Good Lord blessed me and I caught a 5 (pound), 14 (ounce) fish at 2:30. Now, here I am getting ready to fish another day.”

Colson said that he has stuck to one main area, consisting of three different arms of the lake. He said that while many of his competitors were beating the banks with topwater baits, he opted to stay out deeper and fish very, very slow.

“That’s been my key so far, fishing extremely slowly,” Colson said. “I don’t cover water very fast, and it seems like that is what everybody else is doing. That seems to be working for them, but that is not my cup of tea. I like to spend my time fishing slow and dissect the spot, then I move on to another.”

Although he declined to mention any specifics, he did say that he was fishing soft plastics and managed to bag a total of 12 keepers throughout the day. He credited his Garmin Panoptix sonar as being a major factor in his success.

“I can turn my Panoptix directly on the brush pile and it’ll show me if there are any fish there, saving me quite a bit of time. I caught them out of 15 different piles, but I’ve got around 40 different piles marked.

“I figured that if I could catch 10 to 12 pounds a day that I would make the top-20 cut and get to fish the weekend. Anything more than that would be a bonus,” Colson went on to say. “It’s tough fishing out there, but I’m having a lot of fun and doing what I love to do.”

The top 20 pros that will continue to Saturday’s competition are:

Final results for the remaining field can be found on FLWFishing.com. 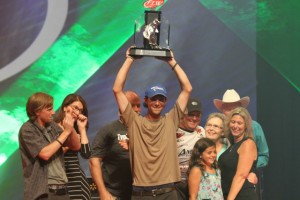 “It’s a blessing to be here competing for the Forrest Wood Cup,” said Hawk of his first win in FLW competition. “There’s a ton of great co-anglers in the field. It has been an amazing opportunity for me.”

Hawk said that he caught the majority of his fish on a Lucky Craft Gunfish topwater bait, but also caught one of his keepers on a frog.

The 2015 Forrest Wood Cup at Lake Ouachita presented by Walmart is being hosted by Visit Hot Springs and the Arkansas Department of Parks and Tourism.

Fans will be treated to the FLW Expo at the Hot Springs Convention Center on Saturday and Sunday from 10 a.m. to 4:30 p.m. prior to the weigh-ins. The Expo includes games, activities and giveaways provided by more than 40 FLW sponsors, the opportunity to shop the latest tackle and outdoor gear from more than 100 exhibitors, Ranger boat simulators, a casting pond and a trout pond for children, as well as the opportunity to meet and interact with top professional anglers, including Hank Parker, Jimmy Houston and Byron Velvick. FLW’s namesake Forrest L. Wood, the legendary founder of Ranger Boats, will also be greeting fans.

On Saturday and Sunday the first 500 children 14 and under each day who are accompanied by an adult will receive a voucher to redeem for a free rod and reel combo courtesy of KATV ABC 7 after the evening’s weigh-in. Also on Sunday one lucky fishing fan will win a brand new Ranger Z520C bass boat with an Evinrude G2 outboard motor courtesy of the Arkansas Democrat-Gazette. The Ranger Boat giveaway is free to enter but the winner must be present at the conclusion of Sunday’s final weigh-in to win.

Also on Saturday and Sunday, FLW fans will be treated to the Bass & BBQ Festival in conjunction with the FLW Expo. During the two day event, fans will have the opportunity to sample barbecue from 30 of the top teams in the country. The competition is sanctioned by the Kansas City Barbecue Society and is a part of a yearlong points race to find the best barbecue in the nation. A $5 donation will give fans five tickets to redeem for pulled pork and rib samples from the competing teams. All fans who buy sampling tickets will help determine the “Fishermen’s Favorite” Award, which goes to the team that collects the most votes. Awards will be presented before the Forrest Wood Cup weigh-ins Saturday and Sunday at Bank of the Ozarks Arena. The total payout for the two-day competition is $10,000.

Live concerts will also be a huge part of the Bass & BBQ festival and the FLW weigh-ins. Shari Bales & Southbound will perform outdoors at the competition on Saturday from 2 to 3 p.m., while the Luke Williams Band will play at the same time Sunday. Country music superstar Justin Moore will headline the festivities with a free live concert on the Walmart weigh-in stage in Bank of the Ozarks Arena on Sunday, starting at 4 p.m. The Valory Music Company recording artist has four No.1 hits, including “Small Town USA,” “If Heaven Wasn’t So Far Away” and “Til My Last Day.”