The central part of the United States is full of dammed rivers that serve to power entire regions of the country. The Midwest and the south feature vast expanses of waterways that have hydroelectric dams on both ends, and like the tides on the Potomac, and Louisiana and California Deltas; feeding can occur with the flip of a switch.

On lakes like Pickwick, Kentucky Lake, Guntersville, Wheeler, Wilson, Ft. Loudoun and others, the predominant fish catching patterns include offshore structure; to be more specific, ledges and shell beds are the items spoken of.
Ledges can be miles long areas of these lakes that are created by the banks of the original river channel that; when submerged by the damming of the river, create natural fish holding structure. These ledges can be relatively shallow on top, to being more than 20 feet deep, and the best areas typically have some sort of ‘extra item,’ shell beds, rocks or stumps that hold concentrations of bass. 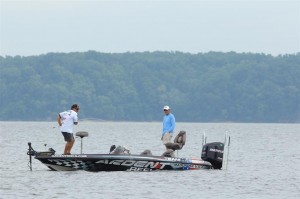 An angler who finds those kinds of sweet spots can load the boat with heavy fish in a matter of minutes. If it were possible, the number of tournaments won in less than a half an hour on offshore ledges would be astounding to count.
So, how does an angler learn to capitalize on feeding periods once they locate the sweet spots on ledges? The first thing is to know the power generation schedules on the lake. This can be accomplished by looking on the Internet, or by making a phone call prior to hitting the water. The second part of the equation is to be prepared to strike quickly once bass begin to strike.

Pete Ponds, an Elite Series pro from Madison, Miss. looks forward to fishing off of ledges. “Bass can really gather up on ledges, and when they get fired up, you can catch a bunch in a hurry,” said the 50-year-old Elite Series pro. “I’ve found that it’s best to have a three pronged approach to catching them, because once you get them going, they tend to move around a little bit on the spot.”

Ponds is referring to the fact that the bass may start out in one position on the structure, move to another while they are in a feeding frenzy, and end up in an entirely different location in relation to the structure by the time the flurry is over.

Ponds has figured out a trio of techniques that he depends on when bass school up on offshore ledges. His three way approach with these tactics blends together to form a system that he relies on to catch more bass off ledges. It’s a three way system for capitalizing on opportunity.

Start Aggressively
Ponds said that he really starts with the fastest way to catch bass and get the school fired up; and that is a crankbait. Depending on the depth of the ledge he is fishing, he picks one of three Bandit Lures crankbaits to target the top edge of the ledge.

If the water on top of the ledge is shallow, he’ll pick up Bandit’s 200 Series, for water that it six to eight feet deep. If the water is around 10 feet deep, he’ll choose a Shallow Flat Maxx, and from 10 to 12 feet he turns to a Bandit Series 300. 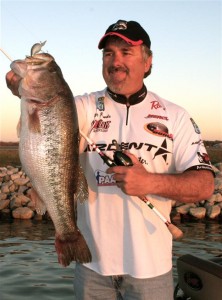 He tosses his plugs on 7’ medium action Duckett Micro Magic White Ice rod that he designed to be his all purpose cranking rod. His rod choice is different than most anglers, because he prefers to feel what the bait is doing before he gets the bite, as opposed to after the strike. “This rod has a faster taper and has more of an L-shaped bend when loaded,” he said. “The glass rods that everyone is using nowadays look more like a letter C when fully loaded, and they might help a little after they set the hook, but I feel better about getting more bites because I can feel what the lure is doing.”

He believes in keeping his reel speeds consistent, and he tries to use the highest possible speeds available, and controlling the retrieve speed by himself. Until recently, he had been using the Ardent XS1000, reel, but is really excited about the new Ardent Edge with 7.2:1 retrieve speed, and ne Drag Tracking Technology for ultimate control over the fish. Ponds fills his crankbait reel with 12-pound-test Vicious Pro Elite 100% Fluorocarbon line.

He prefers shad colors on his crankbaits, depending on the water clarity. His favorites are the Speckled Shad in the Shallow Flat Maxx, and Parrot with Orange, or Chartreuse and Blue in off colored water or Natural Shad and the Fried Squash color in clear water.

Once the Bite Slows Down
After the bass have cooled on his Bandit crankbait approach, Ponds said that his experience is that the fish have often settled. “After they stop biting the crankbait, my experience is that they tend to settle to the lakebed on top of the ledge,” said Ponds. “They’re still there a lot of the time, but instead of being above the ledge in a chasing mood; they suck closer to the cover on the bottom; but they can still be caught.”

In most instances, Ponds turns to a football jig, usually a Pumpkin / Purple / Gold Talon Lures Weedless Football Jig with a green pumpkin Yamamoto double tailed grub as a trailer. However, when he wants to increase the overall size of bites he is getting; he turns to a Talon Shibui Ooki Jig in BP Party Craw or Brown and Purple. He chooses the same green pumpkin trailer for both colors.

“The Ooki Jig has an oversized trailer on it, and it really has a lot of action in the water; even when resting on the bottom,” said Ponds. “I drag the jig along the bottom until I feel objects on the bottom and then a I shake and hop it around the cover to try and make them bite.”

He uses a 7’3” Duckett Fishing White Ice rod and the same Ardent Edge reel, but fills his spool with 12-pound-test Vicious Pro Elite 100% Fluorocarbon for optimal feel and low stretch on the hookset.

Suspend and Flutter
After he has caught a few on the jig, Ponds often finds that the school of fish has moved not only up off the ledge, but that they may have even been re-positioned out off the ledge, and are now suspended out over the main channel; this is where he turns to his Talon Big Dandy Spoon.

While most people would consider spooning a vertical presentation; the Big Dandy Spoon is an oversized flutter style spoon that measures between four and five inches in length. Instead of the vertical pumping method of fishing a spoon; Ponds casts the spoon, and allows it to flutter on a semi-taut line through the school. 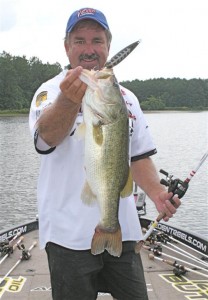 He uses the same rod and reel setup as the jig, but opts for 12-pound-test Vicious Ultimate Co-polymer instead. “I prefer a little bit of stretch and the non sinking properties of co-polymer on my flutter spoons,” said Ponds. “I cast the spoon out above the school and allow it to pendulum through it. If it hits bottom, or I reach the depth of the school, I rip it up and allow it to flutter again; they usually bite it on the fall.”

Putting it all together
By having all of these tactics at the ready during the summer season; Ponds is ready for just about anything. “There are times that I can sit on a spot and wail away on them for hours with one lure, but those are usually few and far between,” he said. “I’ve found that if I keep myself ready for adjustments the fish will make, then I can stay on them and keep them biting: it’s made summer fishing more enjoyable.”