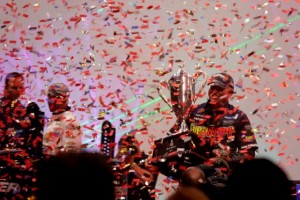 SHREVEPORT, La. (Aug. 18, 2013) – EverStart pro Randall Tharp of Port St. Joe, Fla., crossed the stage with a five-bass limit weighing 14 pounds even Sunday to claim the title of Forrest Wood Cup champion at the Forrest Wood Cup at the Red River presented by Walmart. Tharp, with a four-day total of 20 bass for 53 pounds, 2 ounces, won by a 4-pound margin over the reigning Forrest Wood Cup champion Jacob Wheeler of Indianapolis, Ind., who caught five bass weighing 14-3 for a four-day total of 20 bass weighing 49-2, which was good for $75,000. Sunday’s final weigh-in marked the finale of the 2013 Forrest Wood Cup, which featured 46 of the best professional bass anglers from across the country. Tharp won $500,000 plus a $1,000 Power-Pole bonus.

“Two years ago at the Forrest Wood Cup at Lake Ouachita, I fished what I thought was the most perfect tournament of my life and came up second,” said Tharp, who has now accumulated more than $1.25 million dollars in his FLW career. “If I said that one didn’t sting a little bit, it would be a lie. Last year when the schedule came out and I saw that the Cup was going back to the Red River and Shreveport, I knew that it was going to be my time.”

Despite the drastic change in weather conditions between the practice period and the tournament, Tharp made key adjustments that put him in a position to earn the title.

“The weather change this week definitely made it more of a challenge,” Tharp said. “I was averaging 40 to 50 bites a day in practice, but today I only caught seven fish. It was painstakingly slow fishing today. The fish here just like the hot weather. The big fish weren’t biting until the sun came up and it warmed up in the afternoon, and that’s pretty stressful for a tournament fisherman.”

Tharp said that he had several key baits this week. His primary bait was a 3/8-ounce bluegill-colored 4×4 swimming jig trailered with a Strike King Rage Craw, which he used to weigh in several of his fish throughout the week, including his bigger kickers. He said that he boated a few keepers throwing a Lucky Craft RC 1.5 square-bill crankbait and his three biggest fish from Sunday came on two different sizes of Spro Frogs – a smaller white-colored frog with orange tails and a Spro Bronzeye 65.

“I’ve known before in some tournaments that I had won before I was announced the winner, but I really didn’t know today,” Tharp said. “If you look at the guys that were in the top 10 with me, they are the best in the business. Larry Nixon was catching bass back before I even had a rod and reel.

“I’m so happy that I won,” Tharp went on to say. “I started out fishing BFLs and club tournaments before moving up to the EverStart series and now fishing the Tour. I’ve been making a living fishing for the last five years now, and they have been the best five years of my life.”

The 2013 Forrest Wood Cup at the Red River presented by Walmart was hosted by the Shreveport/Bossier City Sports Commission.

FLW and the Capital City, Lake Murray Country Regional Tourism Board announced Friday that Columbia, S.C., would once again be hosting the Forrest Wood Cup, the world championship of bass fishing, Aug. 14-17, 2014, on the jewel of South Carolina, Lake Murray. The last time the Forrest Wood Cup, the sport’s premier event, was held in Columbia was 2008.

Rayovac pro Jason Christie of Park Hill, Okla., was awarded the second annual Forrest L. Wood Sportsmanship and Community Leadership Award on Saturday, and a donation will be made to Christie’s charity of choice. FLW recognized the angler that exemplified the ideals of sportsmanship and community service throughout the 2013 season. The Forrest L. Wood Sportsmanship and Community Leadership Award recognizes the individual who displayed overall commitment of sportsmanship and community leadership, on and off the water, by displaying ethical behavior, upholding integrity, class, selflessness, conservation efforts and kindness to others.

Coverage of the 2013 Forrest Wood Cup will be broadcast in high-definition (HD) on NBC when “FLW” airs Sept. 29 from 2:30-3:30 p.m. ET. The Emmy-nominated “FLW” television show is hosted by Jason Harper and is broadcast to more than 564 million households worldwide, making it the most widely distributed weekly outdoors-sports television show in the world.