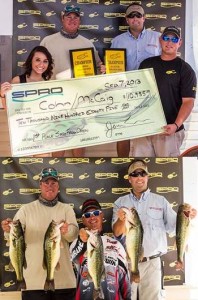 When you hear anglers talk about frog fishing, it’s hard not to remember that first giant bass that exploded through a thick grass mat to eat your frog. Now, when you hear about the Second Annual SPRO Frog Open held on Lake Guntersville September 7, 2013, you’ll remember Hadley Coan and Mark McCaig, who emerged victorious over an unprecedented 238 boat field.

The two Alabama anglers brought in a giant 22.30-pound bag to the scales to take home $10,985, including an additional $500 from the Phoenix Boats First Flight program along with another $500 from T&H Marine’s Atlas Awards program.

SPRO would like to sincerely thank everyone who participated in the tournament. The staff had a great time meeting fellow anglers who are just as passionate about fishing as we are.

With over $28,000 paid directly to the anglers for this event, we look forward to making next year’s event even better—and bigger. Stay tuned…