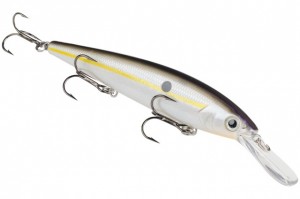 Collierville, Tenn. (Feb 24, 2015) – Although KVD is renowned for his prowess with several baits, his affinity for few of them rival that of a jerkbait. Kevin has successfully adapted his northern jerkbait skills to bodies of water all over the US. In doing so, he has also defined the characteristics that a great jerkbait must possess. Those qualities were refined and designed into the KVD 200 and 300 series of jerkbaits released by Strike King in 2014. The only other aspect that KVD wanted to address in a jerkbait, which was depth, has now been addressed. Debuting in 2016, Strike King is excited to announce the newest addition to their KVD jerkbaits, the all-new Deep Diving KVD jerkbait! 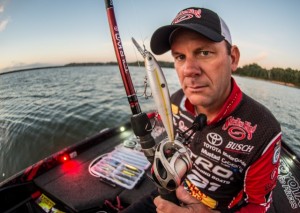 “We got so much right when we designed our existing KVD jerkbaits. The castability, profile and action are spot on. I just really wanted us to build one that would get down to the next level,” explains Kevin VanDam, 7-time B.A.SS. Angler of the Year. “We perfected the bill and the weight transfer system such that this bait will cast great, achieve maximum depth and maintain the perfect action that draws strikes. I can consistently get this bait down to, and get bites at 11’. We have a few baits in our product line that are standouts. This is one of those. It’s special,” VanDam added.

Coming in at 4 ¾ inches long and in 15 KVD approved colors, the new Deep Diving KVD Jerkbait will be available at better fishing tackle retailers everywhere in early 2016!