Why Jig Sink Rates are Important to Wesley Strader 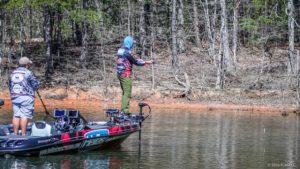 It’s springtime and the bass in your lake are in a mixture of any stage of the spawn.  Some are moving in to spawn, some are locked on the beds in their sexy time ritual and others have already done their business and are trying to recover from the rigors of mating.

Your lake is at springtime levels that have added color to the water and have pushed the level into the brush, and the fish are in amongst the branches and laydowns waiting to ambush prey.  The prespawn females can be aggressive, but the spawning females have one thing on their mind, and the postspawn females are a little lethargic.  What’s an angler to do?

If you are FLW Tour pro Wesley Strader from Spring City, Tenn., you do what you’ve done your whole life; you Flip for them.  But, being able to appeal to a wide range of moods in bass requires paying attention to the presentation of your lures, which in Strader’s case most of the time, is a jig. 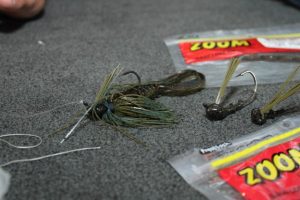 “This is a time of the year that the fall rate of a jig can make all the difference in not only strikes, but in the quality of fish you catch,” said the 20 year touring pro.  “In order to take advantage of the situation, you have to be able to present a lure in a way that gets their attention, and there are different ways to do that.”

Think Differently
Strader said that most people tend to take lures from the package, add a trailer and present it to targets all day hoping to make big fish bite.  “That kind of approach will catch fish, but in a lot of situations, you can increase the size of the fish you catch by adjusting the fall rate,” he said.  “I try to match the speed that a jig falls based on the time of the year, and the mood of the fish.”

The simple way to look at it is that Strader picks a faster falling jigs at times when bass are aggressive, and slow ones when they are not.  However, that would be an oversimplification of the situation.  “Most of the time, bass are not necessarily feeding, so you have to trigger strikes when they are not aggressive,” he said.  “What I try to do is to turn my jig into a reaction presentation when Flipping to make fish strike.” 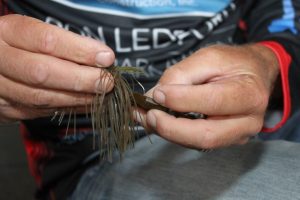 He does that by playing with the head size, skirt size and the trailer type to enhance or retard the way that the jig falls.  “I’ve seen it where a faster falling jig can make a difference at times,” he said.  It’s made a difference for me in tournaments where I was able to place higher because of finding the right combination of parts to make the speed match the conditions.”

The Components
Instead of carrying an assortment of readymade jigs, Strader tends to carry a box of heads in different sizes and skirts separately.  That way, he can put together exactly the combination of jigs that tailor his needs.  He carries everything from 3/8 to 1- ounce heads, but has more volume in the 1/2 to 3/4-ounce sizes.  “I always start with a 1/2-ounce version with one skirt and whatever trailer I feel I need to trigger strikes,” he said.  As the day goes on, I can make adjustments by changing head size, adding skirt material or changing the trailer.”

For trailers, he typically carries four, all made by Zoom.  Hi carries the Big Salty Chunk, the Super Chunk, a Fat Albert Twin Tailed Grub and occasionally he will use the Z Craw when he want to really slow the fall down.  He also said that most of the time, his jig and trailer offerings are in the green pumpkin colorway 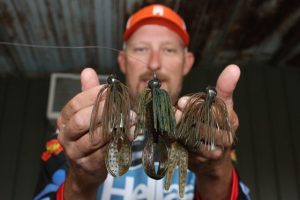 What to Watch For
When he begins the day with a 1/2-ounce jig, rigged with single skirt and a Super Chunk, and he is not getting as many bites as he thinks he should, he starts thinking of changes he needs to make to his jig.  The first change he would likely make, would be to swap trailers.  “If they are in a prespawn, or postspawn mode, the first thought would be to speed the fall up to trigger a reaction strike, so I’ll go to a faster fall,” he said.  “I’ll probably switch to a Big Salty Chunk because the tails are straight, and then I’ll make adjustments to a heavier head size if that doesn’t bring the response I want.”

However, in colder water and during the spawn itself, his first thought is to slow the jig down.  He does that by adding a bigger skirt and a trailer that has more action to appeal to bigger fish, and to give it more time in the strike zone.

Flippin’ Gear
To aid in being efficient, Strader will start the day with three or four rods rigged with different combinations so he can quickly move through the lures to try and elicit the response he wants.  His favorite combination includes a Powell 795 Flippin’ rod paired with a Team Lew’s Pro with a 7.5:1 retrieve speed and 25-pound-test Gamma Fluorocarbon line.  He will have a different combination on each so that he can quickly identify the needs for the day.

This allows him to quickly get a clue as to what program he needs to be on.  “I always start with the basics, then move one way or the other depending on the conditions and time of the year,” he said.  “It has helped me catch more fish over the years, and hs help me get bigger bites along the way too; just paying attention to the clues and making slight adjustments can make a big difference.”