Team Toyota’s Matt Arey has had quite the eventful past few weeks. Two top 25 finishes on Bassmaster’s biggest stages, his first Tennessee turkey, and a torn calf muscle sure makes for some excitement. 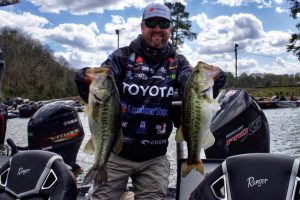 Following another strong 14th place finish in the Bassmaster Classic, Arey was enjoying his week off before Santee Cooper and playing a little pickle ball with friends. The 41-year-old North Carolina native said he’s been playing pickleball regularly this year to get some exercise and stay active.

Unfortunately, just days before the Santee Cooper Elite Arey nearly put himself on the DL list with a nasty calf injury.

“Getting old isn’t for wimps,” Arey said with a laugh. “It was strange, really. I wasn’t making a Sportscenter top 10 diving play or anything, I guess I just moved awkwardly and felt a sharp pain on the back of my right leg. I thought I got hit with the ball or something, but when I turned around and didn’t see a ball bouncing away, I knew something wasn’t right.”

What wasn’t right was his calf muscle. Arey tore his right calf muscle and was in excruciating pain in the days that followed the injury. Along with bringing his professional pickle ball career to a grinding halt, Arey worried he wouldn’t be able to compete in the Santee Cooper Elite. After a few doctor visits, a lot of ice, and some encouragement from his family Arey decided he’d work through the pain at Santee Cooper.

The injury absolutely slowed him down, but it didn’t stop his ability to bring big bass to the scales. Arey put his Costa Sunglasses to work and committed to a slow and steady sight fishing program at Santee. While it came with a few lumps and tumbles he caught over 57-lbs of bass in three days en route to a respectable 22nd place finish.

“It was a mess of a tournament, but we got through it and my doctor was only marginally mad at me,” Arey admitted. “My leg was a swollen mess after standing on it looking at bedding fish for three days, but you gotta do what you gotta do. My doctor said it was about the worst thing I could do for my calf, but it’s been healing well since Santee. It’s a slow process but I’d say I’m back to 75% already.”

To put his injured leg to the test Arey spent his off-day on Wednesday morning doing one of his favorite things on the planet… chasing turkeys. April is hands down one of Arey’s favorite months of the year due to big prespawn bass flooding shallow water and turkey gobbles erupting in the woods.

“It was a beautiful morning in the hills,” Arey smiled. “Our season doesn’t open until this weekend back in North Carolina. So, to be able to scratch my turkey itch this week in Tennessee before tournament was a dream come true. If I can figure out how to bring five keeper bass to the scales each day and leave here with a decent finish, I’ll be the happiest guy in Tennessee.”