Apparently, he was just saving up for the best event of his career. 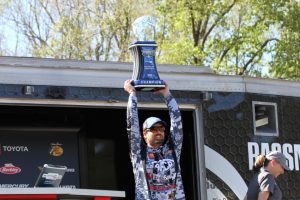 “I completely forgot about the Century Belt. That’s cool,” Cook said. “It was a perfect storm this week. I had a blast. I did really well keeping my composure. There were a couple of times this week the wheels could have fallen off. I acted like I had been there before and it all worked out.”

“That is what is so awesome about it,” he said. “All my friends joked with me and said I was going to win my first tournament either at a place like the Sabine or with a spinning rod smallmouth fishing.

“To be able to win my first one wire-to-wire with my favorite rod doing my absolute favorite things, it is a blessing.”

Spending his time in the Potato Creek region of Lake Marion, Cook caught the majority of his weight in lily pad fields that were located next to deep water.

In practice, the female bass he found had not locked onto beds. But come tournament time, they settled close to the only male he found on bed.

“The area was very special. I didn’t know it was that special,” he said. “Because it had deep water that went all the way to the back of it, it reloaded every day. It really did surprise me. I didn’t know that was going to happen. Having 6 feet of water up against the bank in the back is the reason those fish kept coming in there.”

With 22-pound Sunline Shooter spooled on his reels, Cook used a pair of rods — a Dobyns 754 Xstasy and a Dobyns 744 Champion Extreme. He said the rods were just the right length for keeping bass pinned when they jumped and fought.

When he thought a bass was ready to commit to his tilapia magic-colored Fighting Frog, Cook put slack in his line and repeatedly tapped the butt end of his rod to make the bait’s appendages move in the bed without moving the lure out of the strike zone.

He added that the silver fleck in that particular color creates a reflection that catches the eye of a bass and irritates it.

“The bait isn’t moving toward me,” he said. “The bait is staying where it is.”

Entering the day with over a 4-pound lead, Cook started Championship Monday by catching a 5-pounder he had left the previous day in the first hour. But he was still slow to fill his limit, not doing so until around 1 p.m.

“Not having those fast starts the past two days probably saved me today,” he said. “When it got to be about 1 o’clock, there was a little concern, but I wasn’t too worried.”

“I don’t even remember what happened,” Cook said about landing the big bass. “I think I kissed (cameraman) Jake (Latendresse). It was in slow motion whenever I set the hook until I got it in my hand.

“I knew that was going to be the one that gave me a shot. It was a big sigh of relief and a big weight off my shoulders.”

With a Day 1 bag weighing 29-10 and a 31-4 limit on Day 3, Kuphall reached the 100-pound mark by catching 29-3 on Championship Monday to lift him into second place. The feat was most impressive, considering the Mukwonago, Wis., pro only caught four bass that weighed 13-0 on Day 2.

“It feels great just to be able to adjust,” he said. “Where I caught them on the third day, I didn’t really fish on the first and second day. To adjust and catch them on something totally different and have that kind of weight, I’m really happy with that.”

“Those deeper trees right on the edge on a dropoff into deeper water were the ones I was keying on,” he said. “There was nothing about the tree itself. There was no real pattern there, just where they were situated (in relation) to deep water.”

“I knew I was going to need four or five big ones if I wanted to make a run at this thing,” Palaniuk said. “I caught a 6 3/4- and a 4-pounder (on my starting spot) and then it died off quickly and I couldn’t get any more big bites there. I felt like I was making good adjustments. I just couldn’t catch enough.”

Pat Schlapper of Wisconsin earned the Phoenix Boats Big Bass of the Tournament award with the 9-10 largemouth he caught on Day 2, winning $2,000.

Heading into the fourth stop of the season, the Guaranteed Rate Bassmaster Elite Series at Chickamauga Lake, Cox leads the Progressive Insurance Bassmaster Angler of the Year standings with 285 points. Tennessee pro David Mullins is second with 265, and Arkansan Stetson Blaylock is third with 257.

The Clarendon County Chamber of Commerce hosted the event.

About B.A.S.S.
B.A.S.S., which encompasses the Bassmaster tournament leagues, events and media platforms, is the worldwide authority on bass fishing and keeper of the culture of the sport, providing cutting edge content on bass fishing whenever, wherever and however bass fishing fans want to use it. Headquartered in Birmingham, Ala., the 515,000-member organization’s fully integrated media platforms include the industry’s leading magazines (Bassmaster and B.A.S.S. Times), website (Bassmaster.com), TV show, radio show, social media programs and events. For more than 50 years, B.A.S.S. has been dedicated to access, conservation and youth fishing.