story and photos by Dan O’Sullivan and Rapala

Cold water can be extremely frustrating. Bass can be extremely lethargic and once you find some that look like they might bite, you usually have to target them with itty bitty finesse gear and sow tactics.

Elite Series pro Ott Defoe thinks differently. “Cold water can fishing can really be tough,” said Defoe. “But, with the right approach, you can really do some damage; you just have to find some bass and have the right tool for the job.”

Defoe is largely a shallow water angler, and as such, he likes to keep moving. With that in mind, having a lure that will allow him to effectively cover water horizontally when the water temperature is cold is something that he relishes.

The Shad Rap is that lure.

His confidence in cold weather comes from a lure that he has been using to catch bass since he was a kid; the Rapala Shad Rap. “I caught my first five-pound bass on a Shad Rap when I was a kid, and my first seven-pounder on one in an Everstart tournament in 2004. Needless to say, I’ve got a lot of confidence in the Shad Rap.”

When to Rap
Like any pro, Defoe has an understanding of when to apply each specific category of lure, and that is no different with the Shad Rap. “I use it when the water temperature is in the 46 to 52-degree range,” he said. The tight wiggle of the Shad Rap really appeals to bass in cold water. It has a very natural swimming action and I catch a lot of fish on it in tough times.”

Where to Rap
Defoe’s short answer as to where to toss the Shad Rap initially was, “anywhere.” However, when pressed about the optimal places to use the lure, he became a little more specific. “It really is highly versatile, and I do throw it most anywhere,” he said. “I guess I would have to say that it does have a little bit of a propensity for getting hung up in wood, but there are ways around that too.”

He said that when fish are moving into their fall feed and back out of it, he has a few types of areas that he begins his search on. He likes to look for rocky bluffs, and he does catch a fair amount of his bass on those steep walls. However, he revealed that his best bet is to target transition areas to be able to pinpoint bass a little more effectively. 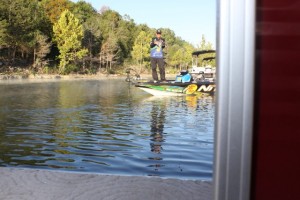 One final place he likes to use Shad Raps is on standing timber or around pole docks. “It takes a little bit more work, but if you can get the lure close and then lead it through with the rod tip, then you can do really well,” he said. “It takes some effort to do it and not get hung up, but there are times that it’s really good.”

Choosing Raps
Defoe said he up until recently, he had primarily used one of two sizes of the lure. “The #5 is my favorite size, but if I need to go deeper than the five to six foot range, then I would throw the #7; which will go a solid two feet deeper,” he said. “Now, Rapala has come out with even sizes, so the #6 will fit right in there as well. It runs about a foot deeper than the #5.”

He said he prefers to chose from a few natural color patterns, and to be truthful, his choices seem a little backwards to conventional color selections. “I like the Shad color, the Crawdad pattern that everyone says looks like a carp, and the Olive Green Crawdad,” he said. “Occasionally, I like the Helsinki Shad color, but that’s only when the water is heavily stained.”

As we said, his color choice is based on water clarity, but it is reverse of how most people are trained to choose colors. Most anglers pick shad patterns in clear water, then go darker as the water gets darker. “I like the crawdad colors when it is clearer,” he said. “I think they are a little more subtle and that seems to draw more strikes in clear water. I go to shad colors with more stain.”

He also said that he prefers to have two groups of Shad Raps. He has some that kind of hunts in its retrieve, and those that track more true. “Because they are made of balsa, you never know what they will do until you throw each one,” he said. “I’ve found that bass want them one way and the opposite at other times, I just have to have them at the ready.”

Rappin’ Gear
Defoe said the spinning gear is an absolute must for throwing the light balsa wood baits. “It’s a crankbait, but it needs to be thrown on spinning gear,” he said. “Baitcasting gear holds these light baits up in the casting, so you minimize your efficiency too much.”

His choice if a 7′ medium action Fenwick Aetos reel paired with a size 30 Abu Garcia Revo spinning reel, and he throws them on 8-pound-test Berkley Trilene 100% Fluorocarbon line. He said that he will go down to six if he needs to, but most of the time he goes with eight. 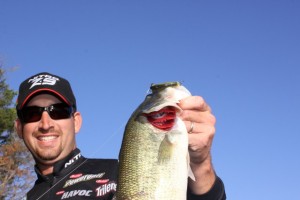 He also changes hooks to the round bend VMC Spark Point trebles. On the #5 he chooses a size six, and on the #7 he goes with size five treble.
Retrieve

Defoe said that the main retrieve he uses is a steady retrieve, choosing to let the tight wiggle of the Shad Rap do the work. “I use a slow steady retrieve in the colder water,” he said. “But, I go with more of a medium retrieve when the water gets upwards of 50 degrees.”

Finally, he said he likes to have a little wind for these to be at their best. “It’s still a crankbait, and a little wind helps,” he said. “If I’m in cold water and I halve a little ripple on the surface, I’m likely to have a Shad Rap in my hand.”