Beyond the Pond – Miyu Fukae

“Man cannot discover new oceans unless he has the courage to lose sight of the shore.” ~ French Writer and Nobel Prize winner Andre Gide

With much courage, seven years ago, Miyu Fukae lost sight of the shore of her homeland, Japan and began the adventure of her life across the ocean on the professional bass fishing tournament trail in the United States of America with her husband, FLW Tour pro Shinichi Fukae. 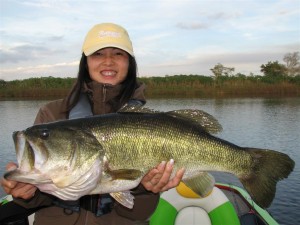 “I was fishing before I met him; I was a recreational angler,” explained Mrs. Fukae as she described her life in Japan before meeting her husband. Prior to the pair joining fishing forces, she passed her days selling tackle at a chain store that she compared to a small-scale Bass Pro Shops. She remembered that time saying, “I worked five days and fished two; but I really just wanted to work two days and fish for five.”

Mrs. Fukae shared that she took note of her not-yet husband when he walked the aisles as one of the store’s pro staff. As they began to build a rapport, their love for fishing grew into a love for each other and a few short years later, the two decided to take the big step. 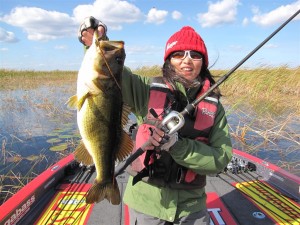 Giggling, Mrs. Fukae stated, “No, the big step wasn’t getting married, it was going to America.” Neither had been and before he could commit to marrying her and taking care of her, Fukae wanted to make sure they could have a future in America; that she too, would enjoy being in the United States and that he could make a living as he did in their homeland Japan, by fishing.
Fukae wanted to make sure they could help each other succeed in their dreams of him being a pro fisherman, nearly 10,000-miles away from their home.

The couple packed up, said goodbyes and set forth to the “Land of Opportunity.” As she remembered telling her family the plan that she and Fukae had developed, she said, “My mother was concerned because she is old school.” She remembered the conversation saying, “My mother wanted us to have a regular job, not a fishing job; like a gambler, but I didn’t ask her… I told her and I just did what I wanted to do, and that was go with Shin.”

Coming to a foreign land without knowing the language and withstanding cultural differences wasn’t the couple’s only obstacles; they also had to hurdle what many from our country only dream of; they wanted Fukae to be a top, professional bass angler in America. “I knew he could do it, he was already Angler of the Year in Japan in 2003; I knew he could be a professional here and make a future for us in America,” Mrs. Fukae said confidently.

Their courage to take their adventurous path led them to their dream-come-true as his first year on the FLW tour, as Fukae earned the honor of the 2004 Angler of the Year title; the two have been here ever since. 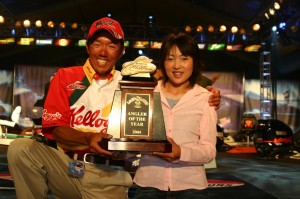 “Honestly, I like it; I like it here better than he likes it here,” exclaimed Mrs. Fukae. Her reasons were simply that there is less to worry about in America than Japan. She explained saying, “Here, I don’t have to wear make-up, if I don’t want, in Japan, I have to; there is just so many things like that example that I don’t have to care about here and I also like fishing better here.”

Mrs. Fukae would definitely have the scoop on fishing both countries. She has quite the fishing experiences on both continents as she joined her husband’s quest for bass angling stardom by fishing side-by-side with him on all of his practice days. She stated, “I went with him about 200 days a year, at first, now at least 100-150 days a year.”

In addition to the fishing that her American life has given her, Mrs. Fukae is enamored with the travel, “I just love traveling to tournaments and I never had a camper before so I love that too.” She told of their first year traveling in a van then stepping up to a camper, compliments of Fukae’s sponsor Yamamoto, for the second year and finally, the ultimate in moving shelter; the motor home with the slide, that they have now. “It is so nice, you can live anywhere you want; we live on wheels, if we stop in Alabama then our home is Alabama, if we stop in Texas, then Texas is our home.” She explained the motor home concept as a rarity in Japan saying, “most people in Japan have never heard of this lifestyle, but I love it.”

Thinking back on her days at the tackle store, she said she missed it a little bit, but not much, she elaborated saying, “my job now is to keep Shin fishing, keep him making a living at fishing while I work behind him.” “I take care of the work to help him, to help him with the language, negotiations and anything else I can; but not driving the boat, I would like to but he wouldn’t like it that much, so I help with everything else.” 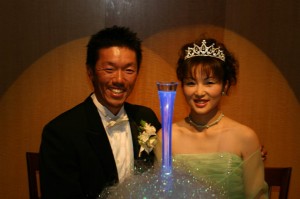 Since their arrival, the couple did return to Japan to marry and they also visit annually on the off-season; but Mrs. Fukae sees America as their home now and believes they will live here and fish as long as her husband is physically able. “I think he will always want to fish, even if he is 60 if he can, he will. “When it is not practice or tournament time and it is his day-off, we still go fishing and we will always go fishing,” she commented.

When asked about the future Mrs. Fukae laughed and said, “Well, I know we will be here fishing and I know we will have our two dogs Adam and Leo and that is just how it will be; it is a fun life to go to tournaments and to fish with your husband.”

After being asked if they would return to Japan to live or to fish she laughingly said, “I am getting Americanized, I am comfortable here; I like it is ‘ladies first’ here; Japan is men first, maybe Shin might likes Japan better because of that; but also I am proud he decided to come to America… he gave me a proud and exciting life in America.” 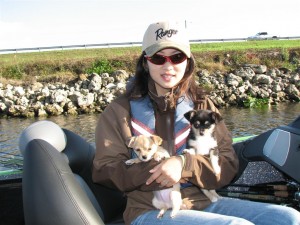