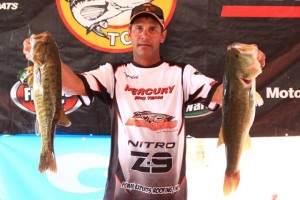 Las Vegas, Nev. –  September 9, 2013 – When the opening round of the 2013 Nitro Boats / Mercury U.S. Open commenced at Callville Bay Marina on Lake Mead, the skies were calm.  However, as with any fishing tournament, there was some excitement brewing.

While the weather remained calm throughout the day, the fishing was reportedly tough for much of the field.  However, someone is always bound to figure out the pieces to the puzzle to stand ahead of the pack.  Today was no different, as Todd Herman, a second time U.S. Open pro, took a strong position atop the leaderboard with 13.22 pounds that included the second largest bass of the day on the pro side.

Standing only a pound and a half behind Herman is young Peoria, Ariz. pro Michael Caruso, who proved his ability to produce big bites on Lake Mead in last year’s event; and did so once again today with a 5.08 pounder that was the biggest bass of the day on both sides of the field.  his big fish anchored an 11.77-pound limit that puts him in good position to contend for the win.

Looming closely in third place is past U.S. Open Champion Gary Dobyns of Yuba City, Calif. who proved why he is one of the best professional anglers in the business with a solid 11.36-pound limit of bass that included a pair of solid kickers; one a 2.52 pounder caught by Dobyns, and a 3.79 produced by his AAA partner Michael Bidak.

Herman said that he has found one particular pattern that was able to produce for him in a variety of locations.  “I caught all of my fish on one lure in four different areas today,” the Gilbert, Ariz. pro said.  “I was the last boat out today, so when I got to what I had hoped would be my starting spot, there were several boats there, so I went to my backup plan, and had it all to myself.”

Herman also said that he has been on the same pattern for the past eight days during practice, and as a result, he feels comfortable; as comfortable as he can be.  “I feel like I can catch fish in clean water, or behind other boats with what I’m doing,” he said.  “So, I feel like I can do well tomorrow; especially being the first boat out, but we’ll just have to see what happens from here.”

Caruso said that today was a grind, but he was able to use the same lure he used to catch one of the biggest event at last year’s event, to catch his big one today.  “I really had a difficult day today; it wasn’t a good day for me,” he said.  “I covered a lot of water, burned 31 gallons of fuel, scraped up some keepers and managed to get the one big bite.  Hopefully I can put things together tomorrow, and this lake really allows you to do many different things, we’ll just have to see what happens.”

Dobyns said that he had to adjust from what he was doing in practice.  “I had two good days, and two horrible days, and then the bite changed today again,” he said.  “I really picked up baits that I really like to fish and junk fished my way to a good limit today; it’s nice to be in a position to make a run at this event again.”

Complete Standings are below.

The WON Bass Nitro Boats / Mercury U.S. Open takeoff will continue tomorrow at Callville Bay Marina on Monday, beginning at 5:45AM, with weigh-in starting at 2:00PM.  Following the event’s conclusion on Wednesday, a champion will be crowned at Boulder Station Casino the final evening of the event.

The WON Bass Nitro Boats / Mercury Marine U.S. Open  See What’s Out There Live Webcasts presented by Costa Sunglasses will begin with a pregame show from the Boulder Station Casino after the Sponsor Showcase and mandatory partner pairing meeting; the live pregame show will begin Sunday Night at 5:30PM.

Daily event coverage will begin following tournament take off with hourly updates at 8:00AM, 9:00AM, 10:00AM and 11:00AM each day, followed by weigh-in coverage beginning at 2:00PM and finally a 6:30PM post game show; all show times are Pacific Standard Time.  .