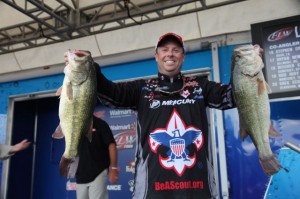 PARIS, Tenn. (June 27, 2014) – Pro angler Tom Redington of Royse City, Texas, brought five bass to the scale Friday weighing 24 pounds, 9 ounces to grab the lead on day two of the Walmart FLW Tour at Kentucky Lake presented by Evinrude. Redington now has a two-day catch of 10 bass weighing 46-15 and holds a 1-pound, 8-ounce lead over second-place pro Scott Martin of Clewiston, Fla., in the four-day event, hosted by the Henry County Alliance, that features 162 of the best bass-fishing anglers in the world competing for a top cash award of up to $125,000.

“I caught a quick limit in the morning, but there was a definite lull and it was getting to be a bit of a grind,” said Redington, who is sponsored by the Boy Scouts of America. “Then the storms rolled in and it was hammer down time. It was a short window and only really lasted for about two hours, but I went to four different spots and caught fish. One of the spots was just one after another.

“Yesterday I had to fish with a lot more finesse and work for them,” Redington continued. “I caught 12 keepers. Today was full-throttle power fishing and I caught around 40 keepers. Every bite was a good one. Most of my fish were three pounds or bigger.”

Redington said that he threw shad-type baits throughout the day and that he caught fish on three different baits.

“I’m not even sure if I’m on the right pattern, but I know what they do during the storm. In practice, the whole time it was a lot of wind and storms rolling through. I kind of got dialed in on what was working, so when it storms I know what the fish like to do.”

Redington said that he was not fishing the big community holes, but that there were a few anglers fishing near him Friday.

“I didn’t back off at all today,” Redington said. “You really need to build up a lead, because it only gets tougher in these tournaments. If I could have caught 30 pounds today, I would have. These guys behind me are too good and someone could easily catch 30 pounds, so you better get them while you can.”

The top 20 pros that will fish Saturday on Kentucky Lake are:

Castrol pro Mike Surman of Boca Raton, Fla., won the Bridgford Big Bass Award and $500 Friday on the pro side with a bass weighing 9 pounds, 6 ounces.

Lambert clinched the 2014 Walmart FLW Tour Rookie of the Year award Friday, which is awarded to the rookie pro angler who finishes the season with the highest point total.

Anglers will take off from Paris Landing State Park located at 16055 Highway 79 N. in Buchanan at 6:30 a.m. each day of competition. Saturday and Sunday’s final weigh-ins will be held at Walmart located at 1210 Mineral Wells Ave. in Paris beginning at 4 p.m.

Fans will also be treated to the FLW Expo at Walmart on Saturday and Sunday from noon to 4 p.m. prior to the final weigh-ins. The Expo includes Ranger boat simulators, a Chevy Truck Tour, the opportunity to interact with professional anglers, enjoy interactive games, activities and giveaways provided by sponsors, and fans can learn more about the sport of fishing and other outdoor activities. All activities are free and open to the public. Also on Sunday, country music star Michael Ray will perform a free live concert on the Walmart weigh-in stage at 3 p.m.