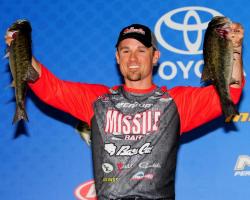 Crews finished the 2013 season ranked seventh in the Angler of the Year race and is set to fish his first Toyota All-Star Event in late September before going on to compete in his eighth Bassmaster Classic on Guntersville in February of 2014.

Top Ten finishes and one B.A.S.S. Elite Series win. Outside of fishing on the professional tour, Crews is also the owner of Missile Baits, a Tackle the Storm

Crews, commenting on the product, said “I have used a number of different sunglasses, including all the most popular brands. Once I was able to wear the Vicious Pro Series with Xperio UVTM lenses, I could see a big difference. They were crystal clear and glare was drastically reduced. It seems like I can also see so much more underwater with them. These glasses are the optical advantage I have been looking for.”

Dr. Doug Jordan, owner, added, “John is an accomplished and respected tour angler, which we love, but he also comes to us with a strong background of moving this industry forward through his work with the PAA and Tackle the Storm. Guys like him will be great brand and product ambassadors for years to come.”