Some of you know the name Brody of the Lake, many of you do not.

Brent “Brody” Broderick is a Bassmaster Elite Series pro from Oregonia, Ohio. But, as of the Douglas Lake event, “Brody;” as he is known to his friends, almost had to call it quits for financial reasons. 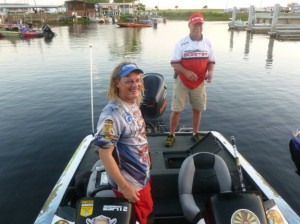 Having tournament anglers leave the National scene because of money issues is nothing new. To play this game correctly, an angler needs to be able to fish freely, without concern for the outcome of the event on the financial side. An angler who makes decisions based on their need for a small paycheck fishes with mental conflict and leaves himself no room for error.

Broderick has been fishing like that all year. At Bull Shoals and Douglas, Broderick found himself with enough gas money to fill the tanks twice. One for practice and one to fish the tournament. He felt most comfortable running upriver in both events, but knew he couldn’t burn the gas, so he forced himself to try and survive on the main lake; he didn’t.

Fact is that Broderick had to make the hard decision to call it quits after the Douglas Lake event if he didn’t cash a check. He wouldn’t have enough money to make the next deposit payment for entry fees, let alone enough to cover his expenses to Toledo Bend.

It all looked like it was over. “I spent Saturday and Sunday at Douglas Lake visiting with fans and friends trying to prolong the inevitable,” he said. “I just knew that the moment I left, I was saying goodbye, and I wasn’t ready to do that; it was really emotional.”

Broderick headed for home with just enough money to get there and he pulled into the driveway knowing that he had a very slim chance of driving to Toledo Bend for his next event. But, he decided not to make an announcement and started hitting the phones instead. 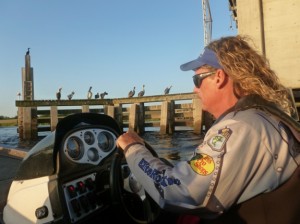 “The sponsor game has not been really good for me, and it’s partly my fault,” said Broderick. “After a decade of trying to make the Elite Series level, I figured there would be sponsors waiting to get that exposure. I was wrong, and while I’ve had product sponsors that have worked out for the most part, the few paying ones that I’ve partnered with haven’t. I had one that bounced several checks, and that hasn’t been cleared up yet. So, honestly, it’s been tough, and I’ve been pretty much self funded.”

That all changed recently.

Fighting to Stay Alive
Broderick spent most of the month long break between Douglas Lake and Toledo Bend on the phone during business hours searching for someone to partner with. “I probably contacted more than 100 companies looking for someone to partner with,” he said. “Anyone that I felt would be interested, or had a business that could benefit from an association to bass fishing got a call.”

He emailed people, called people, sent up smoke signals; anything to get back to work. It appeared to be fruitless. Some people talked about next year, and the possibility of working together in the future; but, that was no help to him. without finishing this year, there is no “Brody of the Lake” in professional bass fishing next year.

That all changed at the last minute.

Family Support
While everything was looking grim; his wife Sandra made the suggestion that he pick up the phone and call some of his friends from his old bass club; the Federation Nation Bass Blasters from Region 5 in Ohio. “I felt bad contacting those guys because I hadn’t stayed in touch while I was busy fishing,”
Broderick said. “But Sandra; my wife, encouraged me to call because my dream was on the line. She and my kids, Gwendolyn and Hunter, have always been behind me, so I started calling.” 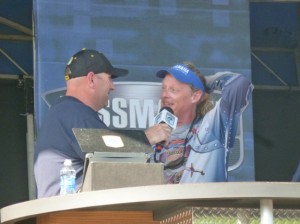 Hope
When he contacted an old club friend named Josh Holiday, he found an interested party. Holiday had fished locally and regionally and knew what was on the line, so he contacted hi father and arranged a meeting. “I couldn’t believe that there was interest, but I had hope,” he said. “We just had to keep our fingers crossed and see what came of it.

With all of this happening with less than a week before the Toledo Bend event, the knots in Broderick’s stomach were growing tighter and tighter. “I was getting sick to my stomach with the time pressure,” he said. “I was seeing the dream of being on the Bassmaster Tour level circling the drain, and every hour that went by it was getting closer to going down it.”

Hopes Soar
Finally, on Friday, June 4, Broderick received a call telling him that the company (who said they would like to remain anonymous for now) would be standing behind him for the rest of the season. “I didn’t know what to do first,” he said. “I thanked them, then contacted B.A.S.S., made the next payment, packed the truck and headed for Toledo Bend.”

He arrived at the last minute to start practicing and felt a sense of relief to be back doing what he loves to do.

Why Brody?
Like so many others before him, Broderick almost became another one of those anglers who became a casualty of the costs of the sport. Being a professional angler looks like it would be a glamorous life with new boats, new tackle and fishing all day; but, as Broderick’s life has proven, is a real job.

There are many folks who wonder why someone like Broderick even belongs on the Elite Series level. Why someone who cashes checks less often than he doesn’t is qualified to fish against the likes of VanDam, Reese, Iaconelli, Jones, Evers etc?

The answer is above – because like Broderick, who found his hopes soaring at the thought of someone signing on to partner with him, everyone needs a dream. When anglers like Broderick find a way to stay on tour, it provides someone for the average man to connect with, and it keeps people believing that there is a chance for them too. 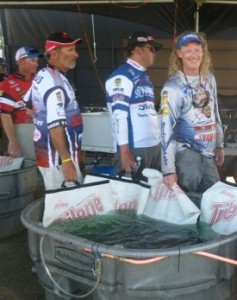 People like Broderick and those other struggling pros on the road are part of the ingredients list for the pro fishing casserole. Not everyone can be the meat, not everyone can be the noodles or the cheese; but somehow, that casserole just doesn’t taste the same without the salt, pepper and spices that bring it all together.

Go ahead Brody, keep living your dream, you help all of us keep ours alive.