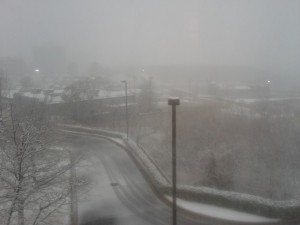 It may not be the worst nightmare that organizers have had for many months concerning the 2013 Bassmaster Classic on Grand Lake.

Early in the week, the intense winter storm – dubbed “Q” by the Weather Channel – was supposed to afflict areas well to the north of northeastern Oklahoma.

But then began the ominous progression of updated model forecasts that have continually taken the late February storm closer and closer to the “Super Bowl” of bass fishing taking place over the next several days in Grove, Okla. and nearby Tulsa.

Meaning that today, the final full practice day for the event, will take place under the following conditions: a full-fledged Winter Storm Warning from the National Weather Service, snow and sleet falling throughout much of the day, and a temperature that holds steady in the lower to mid 30s.

And mind you, that’s if the current storm track forecast – which has trended south all week – holds up over the next 24 to 36 hours.

As of this writing, the radar is filling in across Oklahoma and moderate to heavy snow is falling in many areas across the northern half of the state.

Later tonight, the snowfall could transition into more of an ice storm event with sleet and freezing rain possible, perhaps even significant accumulations of the stuff.

I’ll let the Tulsa National Weather Service office tell the story in the text of their Winter Storm Warning message for Delaware County and surrounding environs:

What does that mean to travel conditions in the area?

As bad as all of that is, what would happen if the storm center veers even further south?

Tulsa Classic organizers could then live their worst nightmare as even heavier snow accumulations could occur. Wichita, Kansas – lying a couple of hours northwest of the Classic site – is expecting as much as 10 inches of snow from this storm.

Hopefully, that bulls-eye of heavy snow will not trend southward today, tonight, and tomorrow.

The good news is that all of this is forecast to take place on a practice day and off day, not on Friday’s first round of the Classic. 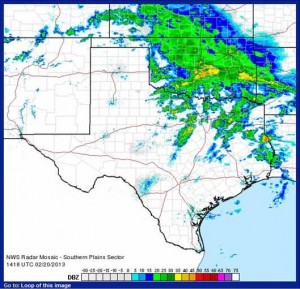 But even then, improvements may only be marginal for the 53 competitors and legions of fans descending on the area.

The current NWS weather forecast for the 43rd Classic’s first round is for cloudy skies, a high in the upper 30s, and a northwest wind of 10 miles per hour. That would help travel conditions improve as the Elite Series pros end the day by driving 90 miles westward into Tulsa for the weigh-in.

But making the drive back to Grand Lake after sunset could prove to be problematic for the pros since Friday night’s low is forecast to be 19 degrees. That could cause any leftover slush to refreeze on roadways.

Saturday morning is forecast to dawn cloudy and cold with temperatures moderating to a high of 42 degrees. There could even be a little bit more rain and possibly snow as a weaker system moves through the area but it shouldn’t amount to much.

Things finally improve by Saturday night as skies clear and the low bottoms out just below freezing.

On Sunday, the National Weather Service is forecasting the best day of the event: sunny skies and almost balmy temps in the upper 50s.

A beautiful late February day to end what could end the most talked about Classic weather forecast in history.