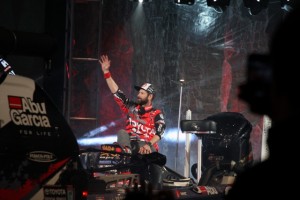 In pursuit of that goal, Iaconelli invests large amounts of time in research and map study prior to going to the lake and this year was no different.  The Pittsgrove, NJ. pro spent countless hours pouring over maps at home in search of the types of areas that he felt would produce winning stringers.  “I figured that the fish would be somewhere between a winter pattern and early pre-spawn,” Iaconelli said.  “So I used Hot Spots Maps and Fishidy.com to try and pinpoint areas that had the kinds of structure I thought I would use during the event.”

Pre-Practice
With many hours of study, Iaconelli had dozens of locations to check when he finally went to the competition site.  That meant that he would have to take a look at each one during his pre-practice trip and begin to isolate those that would be most productive.  He would spend his four day pre-practice doing exactly that.

Iaconelli said that he looked for areas in creek mouths that brought together a combination of deep water access and transition zones.  “What I looked for were points and secondary points that had some sort of rock structure on them,” he said.  “But, they had to have more than just rocks there needed to be transition zones; where larger and smaller rocks started to mix.  It’s a typical pre-spawn necessity, and this is where my Lowrance Structure Scan really helped me find the juiciest areas.”

He was able to find several areas and some of the best were in longer, narrower creeks that provided protection from winds and wave action that allowed those creeks to warm earlier.  One of those which became his primary starting point for the tournament was a secondary creek near Horse Creek that actually held five or six specific areas for him to target.

Practice
While he had essentially eliminated many areas during pre-practice, Iaconelli said he was really proud of the way he practiced the lake during the official practice period.  “I had a conversation with Rick Clunn who told me that he admired the way Hank Parker practiced,” said Iaconelli.  “Clunn said that Parker fished like an animal; covering everything, and that’s what made him to effective come tournament time.”

With that approach, and an open mind Iaconelli set out, allowing himself to check out new things in spite of the fact that he had strong feeling they would not be holding fish when the tournament started.  “That really helped me know that I was fishing the best water I could find, and I didn’t spend any time wondering if there was something I overlooked,” he said.  “That helped me really focus on my primary areas for the tournament.” 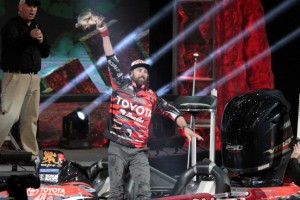 Those primary areas were ten to fifteen spots mid-lake that had the combination of structure and cover along with marginally stained water.  He said if the water was too clear he could not get the bites he needed, and the same with the dirty water.

Day One
Having been a competitor in many championship events, Iaconelli knew how important it was to get off to a good start and build some momentum.  But, having a boat number in the forties meant that he may not be able to get on any of his prime spots.  When he arrived at his first choice expecting to have to move on, he was surprised to find no one on it.  “I couldn’t believe that no one was in there, and when I caught a three and half pounder in the first five minutes, I knew it was going to be a good  day,” he said.  “It would only take me two hours from that point to get my limit and I had about seventeen pounds in the boat at that time. With that much weight that early, I was able to really slow down and fish thoroughly.”

He left that area at 10:30AM to work other spots but by 1:00 in the afternoon, he had not improved his weight.  Ironically it is that time period that he feels cost him the Classic.  “I never figured out the mid-day bite,” he said.  “I think if I had, I would have probably won.”

From 1:00 until check-in he was able to cull up to his final weight of 21 pounds, 8 ounces, which found him tied for the lead with Cliff Pace.

Day Two
He started the second day of the tournament full of excitement because he had an early boat number, which meant he would get more of the early morning bite on the spot he had wanted to start on.  He ran to his spot and dropped the trolling motor in the water and there was no power.  “I recovered as quickly as I could changing out my trolling motor to my spare,” Iaconelli said.  “It took me about thirty minutes to get everything situated and I think I missed most of the morning bite.”

His first fish after the trolling motor incident was a three pounder which he thought would be a good start to getting back where he was on the first day.  However, he left the creek at 10:00 with only around eleven pounds in his livewell, several pounds less than the first day.

He went through the slow mid-day slump again, then just as he was starting to think things would pick up his second trolling motor went down leaving him powerless again.  He called tournament director Trip Weldon, a back-up boat was sent, he switched his tackle and started fishing again.  He was able to cull up to just short of fourteen pounds, however he slipped off the pace and fell in the standings to third place. 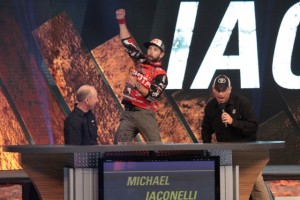 Iaconelli said that he was really proud of the fact the he was able to regain his mental composure following the mechanical issues.  “Eight years ago this would have completely undone me, I would have been ruined for the rest of the tournament,” he said.  “But, I got things fixed and got myself ready to fish the next day.”

Day Three
Being so many pounds out of the lead, Iaconelli knew that his only real chance to win was to swing for the fences.  So, he went to his primary water until ten o’clock to catch a few fish to start the day out.  At 10:30 with four fish for ten pounds in the boat he went looking for his home run trot.  He picked up big swim baits and heavy jigs looking to change some of the mid-day slumps he had experienced with one or two big bites.  He said it was a calculated move that didn’t pay off.  “That’s what you do in the Bassmaster Classic, you try to do the things you can to win,” he said.  “They didn’t work out for me this time but it was worth a try and I’d do it again if I was given the chance.”

Then in the afternoon they started biting better and he was able to cull up again to fourteen pounds bringing his total weight to 48 pounds, 5 ounces, good enough for fourth place.

Hindsight
The one thing Iaconelli said he wished he could go back and do over, was to pay more attention to the main lake fish.  “Once the wind started blowing on those main lake banks I believe that’s where some of  the better quality fish started coming later in the event,” he said.  “I think that’s the one pattern I overlooked and I wish I would have given that a chance. Other then that I made good decisions and had really good execution so I have no real complaints, or things I would change.”

Techniques and Equipment
For the past several years Iaconelli has been experimenting with what he calls his one-two punch in tournaments.  The philosophy is built on using reaction baits to locate and catch fish quickly, then doubling back and using finesse type presentations through the same stretch to catch more or better quality fish; he used that approach here.

His first punch involved a Rapala Husky Jerk, and Rapala DT6 crankbait.  He started with the jerkbait using slow and long suspending movements and would mix in the crankbait where he felt the fish were more related to cover.  He said it was important to modify the baits to make them suspend, slow sink or slow float to make them more appealing.

He did that by up-sizing his hooks to VMC 1X trebles.  He threw the Husky Jerk on a 6’4″ Abu Garcia Veritas rod and Revo Premier 6.4:1 reel spooled with 10-pound-test Berkley Trilene 100% flourocarbon.  For the crankbait he used a longer 7′ Veritas Winch rod with everything else the same.

The Husky Jerk was retrieved with short snaps and long pauses to mimic an injured bait fish, and he would reel the crankbait down to six or seven feet, then employ slow pulls of the rod much like fishing a Caroling rig.

The counter punch involved using a 1/2 ounce Berkley Gripper jig in green-pumpkin with a baby Chigger Craw.  He threw that on a 7′ medium-heavy Veritas rod with a 7.1:1 Revo Premier spooled with 12-pound-test Trilene 100% Flourocarbon.  He would use this where there was brushy cover associated with his transition zones. 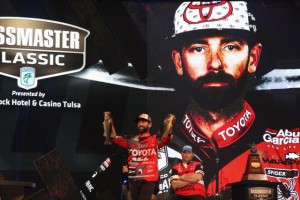 Finesse tactics accounted for approximately 20-percent of his weight.

Final Thought
Iaconelli said that it will appear to viewers that he was fishing docks, however that was only a convenient coincidence.  “I was really fishing the structure on the points under the docks,” he said.  “So I believe that helped me when other competitors came through my areas.  It helped kind of misdirect them away from what I was really doing.

“Aside from that mid-morning bite that I wished I had figured out, I feel good about the way things went,” he said.  “Of course I would have rather won but all things considered I had a really strong tournament.”