All Star Semi-Finals and the U.S. Open 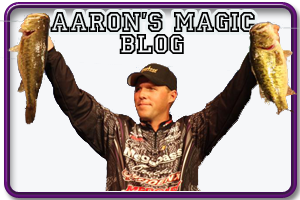 I finally had a day off, sort of. I just spent almost all day getting the boat ready for the river. Practice for the All-Star event finals starts tomorrow.

I keep thinking about the fans who voted me into this All-Star event and wow, it still amazes me that the fans stepped up for me like that. I always work hard at every tournament, but I am going to work even harder on this one. I donâ€™t want to let the fans down that voted for me. I will be on the water before the sun comes up and until well after the sun goes down for the next few days.

I have a tough match up in the first round with Edwin Evers. He knows the river better than anyone with the exception of Kevin VanDam so itâ€™s going to be a tough match up. I really wanted to face Kevin, but the battle with Evers will be plenty for day one. This is an interesting format where we only have to have more weight than one other guy and then start all over the next day. Win three days straight and you are the All-Star champion. It is a winner-take-all event, so everyone will be going all out every day.

I havenâ€™t blogged since the Open, but I wanted to say a few words about that event. First, I really want to thank WON Bass for giving the West, the countryâ€¦ actually the world a great event on a tough, but great fishery. The US Open is probably the tournament I enjoy the most all year. I fish bigger and more publicized events but the Open is special to me. There isnâ€™t a lot of pressure to win, and there arenâ€™t any points on the line like most of our events. Itâ€™s on a lake I really enjoy and I get to catch up with so many of the anglers I grew up fishing with and against.

It was a brutal week, between pre-fishing, ICAST, the desert sun and not much sleep it can really take a lot to make it through. I think I averaged four hours of sleep a night while I was in Las Vegas, and it wasnâ€™t from what most people go sleepless for in Las Vegas.

The road trip out, which has been talked about by Bassmaster.com and a few other media sources, was a long drive but we made it with some time to get some pre-fishing in. My family is still back in California visiting with family and friends and I miss them, but Iâ€™ll get to see them on Monday when I fly back. I look forward to seeing them on Monday, hopefully with a new trophy. If that happens, I know itâ€™s the fans of the sport and my fans that I can thank for giving me this opportunity.

Iâ€™ll try to blog after each round so stay tuned.